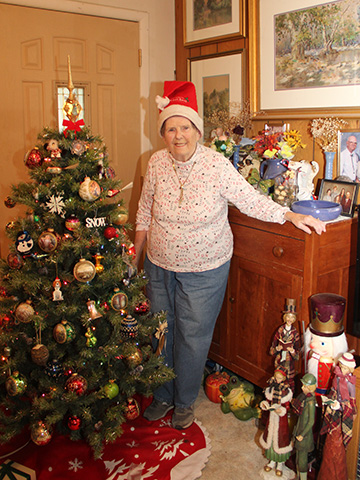 If a small town is lucky, it’s got some folks who spread Christmas cheer throughout the season. Martin’s got at least one who makes holiday merriment while wearing her signature elf hat. She’s Martha Ann Riggs.

Born at Richmond, Kentucky, she was raised in Bowling Green, the only child of Stanley Matthews Stagg and Ethel (Walters) Stagg. Although Martha has been out here for decades, there are things about her that are very Southern -- things at least this Alabama native noticed.

Mrs. Riggs enjoys genealogy and talking about family. She is a descendent of George T. Stagg who founded the Old Stagg Distillery. Operating now as Buffalo Trace, it’s still producing a fine Kentucky bourbon with the George T. Stagg label.

A member of Colonial Dames, she is also an active member of the Gordon-Lone Willow Nebraska DAR Chapter, joining in 1982, and is an honorary State Regent. She occasionally turns her pen to poetry and DAR-related articles.

Everyone has seen Martha around town especially during the Holidays because she is always sporting an elf hat. But perhaps some wonder how a Kentucky native ended up living in Bennett County.  The story goes like this.

“When I was sophomore in high school, Barbara Riggs began attending College High School. It turned out that she had a brother named Ronald. Their dad, Al Riggs, was born and raised in Calhoun, Kentucky. After he graduated from high school, he started following the wheat harvest. He went down through Arkansas, Texas, Missouri and up into Nebraska and South Dakota. He wrote down one time, “On one of my trips into South Dakota, I met a woman named Ida Wallingford and I never got away again!” Ida lived at Tuthill.

“Al and Ida were married and lived in this region of the country with Ronald being born in Denver. Ultimately they moved back to South Dakota. When Ronald was a senior in high school, somebody asked his dad where he would send Ronald to college. And Al said, ‘I haven’t thought much about it.’” But think about it he did. “Ida and the two kids went back to Bowling Green so that Ronald could go to Western Kentucky State College. It was connected to the College High School and that’s how his sister was in my high school class.

“He was a freshman in college, so I met him and you know how one thing leads to another. On November 18, 1955, we eloped to Athens, Alabama. There was another couple with us and Ronald and the other young man picked the place.

“We came out here for Christmas and they chivareed us.” Martha explained “chivaree.” “After 10:30/11:00 o’clock at night after everybody’s gone to bed and the lights are out, all of a sudden there comes a big banging on metal pot lids with people yelling and screaming and they drag you out and take you to Main Street and push you up and down the street in a wheelbarrow to celebrate your marriage.

“After Ronald graduated from college, we lived out east of town with his parents. At the time, Al was renting the Benson place and we had cows and raised wheat. Leigh Ann was born there. In ‘59, we moved out to the Cummings place where Alfred was born. And in 1963, we moved to Allen, having bought land from Elmer Smith. Linda was born there.

“Ronald had been asked to teach 7th and 8th grade at American Horse School because he had a Bachelor’s in Education. And so he started teaching out there and then he became principal and had that job for 20-some years along with ranching.”

Martha began her collections when the family retired to Martin with the encouragement of Ronald, who loved his wife’s passion for collecting. It started with a single Nutcracker. Now an avid collector of angels, Santas and Nutcrackers, Martha has her Christmas tree decorated with meaningful heirlooms and dated commemorative ornaments.

Sometime after Ronald’s passing in 2007, The Hat came along. Mrs. Riggs dons the elf hat the day after Thanksgiving and wears it through Christmas Day.

Wearing her elf hat brings her joy because other people enjoy seeing fun things and the hat definitely gets noticed. “You’d be surprised what people notice. Years ago when I’d go to the grocery store, one of the employees would see me coming in the door and he’d go, ‘Here comes Santa!’ People notice.” The funniest reactions she gets during the holidays happen when she isn’t wearing the hat. “Somebody will stop me on the street and say, ‘Where’s the hat?!’”

I suggested that it might be fun if the whole town started emulating Martha and wearing Santa hats but she thought it would be kind of weird… Generally she does not wear hats – only during the Holidays.

Martha recalled Christmases when she was a child living in Kentucky. “I was an only child. At Christmas time, Mother, Daddy and I used to drive from Bowling Green to Boonesboro. We never spent Christmas at home. Daddy was an engineer and the only time he had off was around Christmas.

“So to start with we’d drive to Frankfort and spend Christmas Eve with his mother and Santa Claus would come that night to Grandmother’s house. I remember I slept in Grandmother’s room which was right behind the living room at her house, so Santa had to be very quiet when he came.

“Christmas Day we would open gifts and then drive the short distance to Boonesboro to have Christmas dinner with Mother’s family. One time we were driving down this old country road to get to the house and it was slick and the car slid off the road and if it hadn’t been for a fence on the side of the road, we would have gone right down into the gully. We couldn’t move the car. Of course this was in the 1940s and the old cars weren’t 4-wheel drive, so we had to walk the rest of the way.”

“Other than the birth of our children, probably the best thing that happened to my husband and me was our trip to Alaska in 2006, which was a fiftieth anniversary present from our children,” Martha shared. On their trip, the couple went fishing and Martha caught the only fish and it was a whopper – almost as big as she is!

Here’s Mrs. Riggs’ advice for how to live: “Watch your language, don’t do anything you’d be ashamed to tell somebody about and mind your manners.” “I try to set a good example,” she said.

An active member of Lindsey Memorial Presbyterian Church, Martha edits the church newsletter, sings in the choir, composes the occasional Christmas hymn and sometimes brings the Message on Sundays when the pastor is away.

In addition to her work at Lindsey Memorial and with the DAR, she is an devoted jigsaw puzzle worker. Edges first – of course.