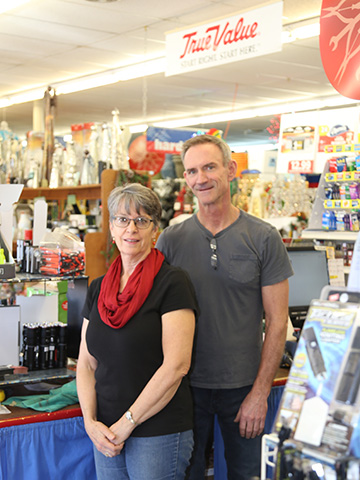 On January 1, Matt and Judy Kratovil handed over the keys of the Martin True Value Hardware store to Tate and Amanda LaCroix, ending a 32-year run of the store residing in the hands of someone in Judy’s family.

The sale to the LaCroix ended 19 years of ownership by Matt and Judy and prior to that, Judy’s family had owned the store since 1976 when it was a Coast to Coast store.

Glenn and Phyllis Shepardson purchased the store in 1976 and in 1980 constructed a brand new building, the one in place today.

When the Kratovils purchased the store in 1999 from Judy’s brother, Don Shepardson, it was in the process of converting from Coast to Coast to the True Value name and it has been True Value since.

Matt was a long time fixture at Lacreek Electric Association, starting out in 1983 in the warehouse. He later became a lineman until leaving Lacreek to start out as a business owner on Main Street in 1999.

Judy worked at Security First Bank in Martin, starting there in 1984 and working around having four children, left there in 1997 to work for her brother, Don, at the hardware store.

Matt and Judy worked side by side at the store over the past 19 years building a solid reputation as a store with outstanding customer service and knowledge of the products they carried.

Both have been very involved in the community serving on several local boards, including the Martin Area Chamber of Commerce where Matt has been the president for six years and Judy has served as the Secretary  for much of the last 19 years.

Judy has returned to work at Security First Bank and Matt will now turn his focus to other business ventures, including woodworking.

Matt also plans to continue with his many volunteer efforts, including the fitness center, golf association and the Lutheran Church.

“I’m too young to retire, but the stress on my joints from being on concrete floors all day for so long pushed me to make the decision to sell the store and get my body healed up,” said Matt about why they decided to sell the store. “I feel real good health-wise other than my joints.”

“We are going to miss the people we get to see coming into the store,” said Matt. “It has been quite a learning curve but building that trust with the community and helping customers find what they need has been very rewarding. It has been fulfilling to be the guy people go to when they need specific things or have questions about their projects or needs and I can help them out. I’ll miss owning a business and being in control of my destiny.”

“I’m glad these two outstanding young people (Tate and Amanda) are buying our store,” said Matt. “They are energetic and intelligent and I think people will really enjoy working with them.”

“I am going to miss our customers and the interaction with them,” added Judy. “People have come in lately and said they are going to miss us and that makes us feel good. We’ll also miss the many friendships we have developed. When new people came to town, they would say how impressed they were that we knew their name. People would tell us they liked to be treated the way we treated them and that was part of our goal of providing outstanding customer service.”

“The secret to survival in a small town is customer service and diversity,” suggested Matt. “We survived because the community wanted to do business with us and we were very thankful for the loyalty shown to us over the years. People are proud of their town and wanted to support us and the town.”

In summing things up, Matt ended by saying, “It’s been a good ride... it’s been a lot of fun.”