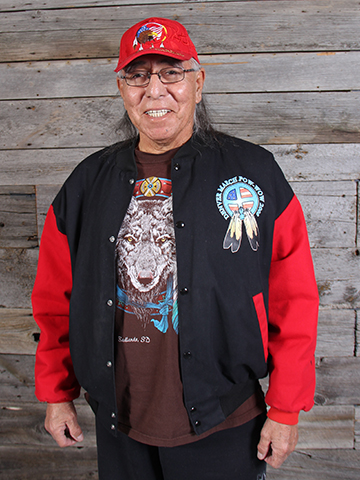 After a career spanning more than 40 years in electronics, Seymour Young Dog returned home in 2005 to his family’s place eight more north of Batesland on American Horse Creek. These days you can find him bowling on Wednesdays with the Senior League.

Along American Horse Creek about eight miles north of Batesland, Seymour Young Dog, one of the ten children of Amos Young Dog and Dora Around Him, was born in 1943 in his parents’ two room log cabin, a home without electricity or running water. Young Dog’s most precious memories come from his childhood at home with his family.

Because his father’s inspiring work ethic and his mother’s determination for him to get his education, Young Dog went on to become an electronics technician working for Martin Marietta, General Dynamics, NASA and other tech giants.

With a gift for mathematics, Young Dog was encouraged by his mother to complete his education in spite of an abusive school environment. Young Dog and his siblings attended the Oglala Community School at Pine Ridge where they were forced to give up their Lakota language and speak only English.

Young Dog shared, “I was taken to boarding school and dropped off. We were only able to go home three times a year and for the summers. It was like military school. We had long braids and they shaved our heads – they said we had lice. They gave us government clothes. The girls and boys were in separate dorms and we weren’t allowed to talk to our siblings in the other dorm.

“We were under the gun – if we ran away or anything – they threw our parents in jail. But my childhood days at home with my family were some of my precious moments. Where I live now I remember playing with my brothers in the creeks and climbing trees. My dad forever worked for the farmers and ranchers – that’s where our work ethic came from – hauling hay, working cattle, whatever farmers and ranchers did.”

“My mother was instrumental in my getting an education,” commented Young Dog. “She just pushed us to get our educations. When I graduated from high school in Pine Ridge in 1963, I went to Haskell Institute in Lawrence, Kansas. It was a vocational school for all Native Americans across the United States. They taught all the trades, including electronics, and also secretarial and bookkeeping courses for women. It was a two-year program. It was the first time I had left the reservation – so to speak.

“I met Indians from all over America – Choctaws, Cherokees, Navahos, Hopis, Pueblos, Sack and Fox – I didn’t know that there were that many tribes. I never studied so hard in my life, because I knew what education was all about since my mother instilled this in me. And those guys that graduated in electronics before us, they came back driving new cars and had money in their pockets. Man, if you don’t think that made me study! Figures and numbers – that’s what I loved. I graduated in 1965. That’s where I got my start in electronics.

And it was there at Haskell where he met his wife of 55 years, Margaret Vann, a Cherokee from Tahlequah, Okla. Together they worked in five states, settling in Idaho Falls, Idaho to work for Idaho National Engineering Lab for 20 years. Margaret worked as an inspector on the nuclear reactors – sixteen in the Young Dogs’ early days there – while Seymour continued his work in instrument calibration. Together the Young Dogs raised four children and helped them all to become educated.

“After we graduated from Haskell,” Young Dog recalled, “I ended up going to California to work for a company that had government contracts for the Vietnam War – MEC, a division of Teledyne. I worked on a radar system that the military was using so I wasn’t drafted; I was deferred.”

“I’ve been in electronics my entire life – I kind of grew up with it. Before transistors, there were the big vacuum tubes – turn the radio on and it took awhile to start,” Young Dog remembered with a  laugh.

Following his work at Teledyne, Young Dog shared, “I worked on instrument calibration projects for the Viking Lander space probe to Mars for Martin Marietta, one of many companies teamed up to land on the planet. The 200 of us who were working on the project were elated when it made the soft landing. Once it landed it took 20 minutes for signals to come from Mars to the command center. And then it started taking pictures of Mars and transmitting them back and we could see the surface of Mars!  I couldn’t wait to get to work each day. We were doing some neat things.”

After a short stint with NASA in Houston, Young Dog went to Pennsylvania to work on an Aeronutronic contract with the government of Kuwait teaching electronics instrumentation to Kuwaitis at Willow Grove Air Station.  “I liked teaching what I knew to the students,” Young Dog said. “When I was in Philadelphia, I was the only Native American working for that company. Word got out: ‘Young Dog.’ People wanted to talk to me because I was the first Indian they had ever met. I spoke to students at Temple University a couple of times about my background.”

Kuwait had bought planes from the US government but their military needed electronics training. When the contract ended, Aeronutronic, then a division of Ford, asked a group of trainers to go to Kuwait to conduct on-site training but in the end Young Dog decided to not go instead joining the team at General Dynamics.

After completing his assignment with General Dynamics and prior to moving to Idaho to work for INEL, Young Dog worked on a top-secret military satellite transponder project with Motorola.

I asked Young Dog to tell me about one of the projects that he worked on during his career. “Right now every ship that you see has a white dome on the back with a gun. It’s called a Divad Gun System. I worked on that project for General Dynamics. It was designed to shoot down cruise missiles. I worked with some of the sharpest engineers on that. It weighed about three tons but it was on rollers when we were testing it. It was like a cat. It would detect a cruise missile coming in. This big radar  – it just watches.

“I was really proud to work on that – it was quite an accomplishment for our team. I worked as the technician on the project. We designed it in theory on paper. Then I’d build it on a board and see if it would work. We tested the gun off the coast at San Diego and we had a shoot-out with a Boeing team that was working on the same technology. It literally blew up a missile that could have hit the US in testing. I thought, ‘Boy, it had better work!’ They turned that thing on and it watched and then it went “brzzzzzzp” and then “brzzzzzp” and we waited and then way off in the distance we heard ‘Boom!’ – the cruise missile was shot down! We won the shoot-out and General Dynamics got the contract.”

“When I turned 62 that was it, I retired. I wanted to retire when I was young enough and still able to do things,” said Young Dog. I’d load up my horses, my camper and off I’d go riding trails all over the West. I thought about buying a house somewhere else. I wanted country. I had lived in cities – LA and Denver. Concrete and metal. And there was seclusion – quiet, peaceful. So we came home. We hear the coyotes every night. Just the way I did growing up.

Young Dog has three horses, two Apaloosas and a Paint. In the early years of his retirement, he rode the Chief Joseph Trail Ride, a progressive ride following the journey of the Wallowa band Nez Perce Chief Joseph’s 1,300-mile journey trying to escape the U.S. Cavalry during the War of 1877. He enjoys his horses, having participated in rodeos both in competition and as a performer.

“I planned my retirement. It took me about six months to slow down. I would call where I used to work, but I had to let it go because I was done. Sometimes they’d call me up to ask questions about a project I had left behind when I retired. But it started to fade away.

Since returning to the reservation in 2005, Young Dog has been involved with the Ethics committee for the Oglala Lakota tribe. He worked as a volunteer tutor in the math classes at the Batesland school and has done some speaking for groups in the area as well as in Rapid City. He’s excited about Pass Creek Wind and will be involved as a volunteer on the wind energy project. “It’s a good idea. We should start doing that. It’s something so positive that all the people can use,” he said.

Young Dog and I talked about the importance of role models when our conversation began to wrap up. “That’s the story that needs to come across,” he agreed. Young Dog had a successful career in a field where he was the only Indian on the projects he worked on and he got there because he stayed in school, worked hard and got an education.

“These kids are smart. They need mentors and someone to show them. I talk Indian to them. There’s no end to success. You don’t know what you know until you get out there. You have to utilize it. It’s tough – it isn’t easy. People will notice when you start doing well. They will help you. But I was also called names and went through hell. But that made me more aggressive and assertive to learn.

“No matter what stay in school and finish.” That’s the advice that Young Dog gives to youth. “A lot of times they use me as an example because I’ve done well.” Young Dog said that he also advises adults. “I talk my language and I say, ‘You went to the same school I did – boarding school.’ So when I talk, I tell them, ‘Now you got some children. You got grandkids. You better talk to them. If they are involved in whatever school activity, you better make sure you’re there supporting them. Because those kids need it big time. Knowing that you’re in the crowd is something for that kid. So that’s how I talk now to my people.

As we wrapped up our visit, Young Dog said, “Everything I ever did wasn’t easy, but it was worth it.”