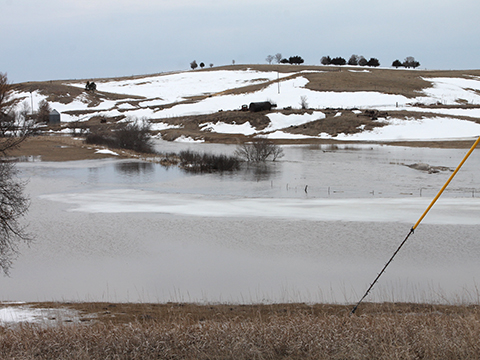 Winter storm Ulmer may be over but its impact is still being felt across Bennett County and throughout the region.

“We believe all rural roads in general are impacted by at least snow-melt water. In some places there are two to three feet of water standing on it for quarter mile stretches. The water isn’t moving but standing water from runoff,” stated Jeff Siscoe, Bennett County Emergency Manager.

However, some locations are currently impassable:

• Culvert with unknown damage at present but impassable: 227th Ave north of the Project Road

Officially Bennett County is under a no travel advisory. Judd Schomp, County Commissioner and member of the Roads Board stated it this way Saturday on his Facebook page on behalf of the Bennett County Board: “Travel at your own risk.”

“Part of the problem is we don’t know everything that is damaged yet. We haven’t been able to get to everything. We’ve used ranchers to go do reconnaissance because we can’t get to where they are going,” Siscoe said. “One rancher who is a volunteer firefighter at Tuthill has been doing river recon, “Siscoe said, “I think on a 4-wheeler — because we can’t get there. We have so much good intel from other people — I am really thankful for that,” Siscoe stated. “We wouldn’t have some of the information we have if people weren’t willing to do that.”

The current flood warning from the National Weather Service has been issued until 11 a.m. MDT Wednesday for southeastern Bennett County. It includes areas along the Little White River and Lake Creek from west of Martin to Tuthill to the Todd County Line.

Major flood stage for the Little White River in Bennett County was reached on Saturday. “The National Weather Service said we’d get a 12-18 inch rise on Saturday,” according to Siscoe. “We got a three-foot rise. It crested on Saturday south of town at 73. It was expected to crest in the Vetal-Tuthill area on Sunday.”

“All you see is the water — you don’t know what is underneath it or NOT underneath it — the culvert may be compromised. People should use extreme caution if they drive through water — but I do not advise it,” stated Siscoe.

Every rural road in Bennett County has probably been impacted with snowmelt water in multiple places. In some places, it’s a rutty, muddy mess but in other places the road is seriously compromised. “This is why we’re saying we don’t want people traveling yet. People really need to use their heads right now. If you’re out driving at night, don’t drive faster than your headlights can keep up. You have to have time to stop,” said Siscoe.

If there is an emergency, everyone should call 911. That is the best way to get emergency services activated. Siscoe said, “We had one evacuation of people out of one house. They live down a long hill and couldn’t get out on their own. So Game, Fish and Parks used a state-issued tracked side by side just for this type of emergency on Friday. A flyover has been requested of the State Highway Patrol to check on the house. A local pilot has been asked to do reconnaissance flights as well.

Bennett County talked with Black Hills Life Flight last week when officials knew what was developing and the county roads were getting bad with snow melt. BHLF agreed to help with EMS calls where an ambulance can’t reach and fly directly to the scene. County officials talked with BHLF about how to tell them where they need to go with GPS coordinates or other turn by turn directions and aerial descriptions. However, the county is not paying the BHLF charge.

Bennett County is currently in the assessment phase of this disaster, but it is an ongoing disaster right now. County officials will formulate a plan. Siscoe speculated that the County will start with people who can’t leave their homes because of impassable roads and then major arteries where the most people can be helped will be addressed next. “But this is going to take awhile,” he said. “There will be no quick fix. Correcting everything that’s wrong will likely take into the summer. Some roads will only need reblading. Other roads are down to the base coarse.” And as everyone knows, some roads are just dirt.

BCSD school buses are bringing students into Martin for school. However, due to the flooding, 12 students from six families were not in school on Monday. Additionally, three school staff members could not get to work.

Siscoe explained the disaster reimbursement process. “We have put in for a disaster declaration. What we’ve done so far doesn’t guarantee any money coming back into the county at all. There has to be a Presidential Disaster declaration. Then the State will eventually ask for the Disaster Declaration request from the federal government. This is still an ongoing disaster. There are thresholds that the county has to meet, like costs to repair impacted roads for example. Then there’s a statewise threshold that has to be met. So for the county to qualify they have to be over their threshold but for the state to get the declaration, statewide they have to be over their threshold for public infrastructure damage. Eventually the state will ask us for preliminary damage assessments and we’ll have to send photos and estimates of costs to repair each place and lots of documentation. If we get that then we would be reimbursed a percentage of our costs by the state and FEMA. There will always be a cost for the county — the county will have some expenses in this.”

“During the response stage where we are right now going from response to recovery things can move fast. But during recovery, it is long and grueling,” Siscoe said. “Some roads will just be rebladed. Other roads will need lots of loads of something to put the road back the way it was.” The county has the expertise to replace a culvert but will possibly hire a contractor to put large culverts in place.

“Right now we can’t do what we can’t do. We are asking people to be patient,” shared Siscoe. “Gawkers are interfering with County crews” and should just stay home.

Residents with damage to their homes and lanes are encouraged to contact Jeff Siscoe with details of their situations at the Bennett County Emergency Management Office 685-6991.