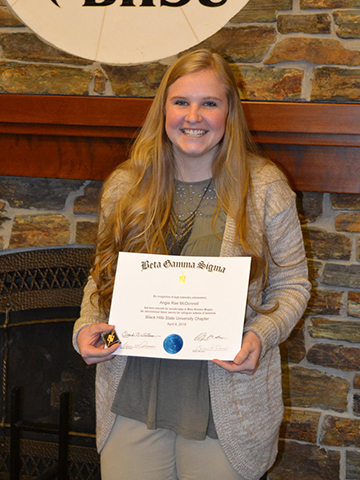 Angie McDonnell, of Martin,  was inducted into the Black Hills State University Chapter of Beta Gamma Sigma, the International Honor Society for Collegiate Schools of Business, on April 9, 2019.

To be accepted at the undergraduate level, Angie had to be in the top ten percent of her class.

Angie is currently pursuing a Bachelor of Science in Mass Communications degree with emphasis in Photography, Professional Accountancy, and a Minor in Entrepreneurial Studies.

Inducted as students, BGS members go on to serve in critical leadership roles in corporate, entrepreneurial, government, non-profit, and academic sectors. Members currently reside in all 50 states and more than 190 countries.

Notable members include Nobel Prize winners, Olympians, inventors, CEOs of major global companies and nonprofit organizations, deans of the top business schools, and others who are making the world a better place at all levels of contribution through social enterprise, service, and leadership.

Dr. Priscilla Romkema, President of the Regional Health Foundation, was the guest speaker at the Induction Ceremony.