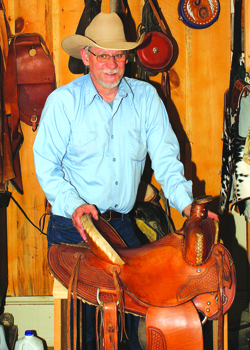 Randy Gropper’s wood building front of Gropper’s Saddlery has also weathered naturally the past couple of years, and speaks to an old fashioned manner.

For Gropper Saddlery, he specializes in custom made saddles and tack. Chaps, canteens, anything made for the horse.

Randy’s signature saddles are built with an ulterior motive. “I hope I change your lifestyle,” he tells his saddle customers. “If a saddle fits your horse, and a guy fits the saddle, they usually have a good day.”

“They ride more. You will get more pleasure out of riding, and will spend more time on your horse.”

“I’ve made about 400 saddles. I have saddles all around the United States and around the world.”

A saddle takes about a month to make, if that’s all that he is making. He also makes hat stretchers regularly, along with the chaps.

Randy prepared a list of items he has made in his business. The list seems endless. He has made over 9,000 canteens.

He contracted with a major outdoor sporting goods company for about six years before they changed ownership. “That was pretty cool,” he added.

While working for a chap factory, he helped mass produce chaps, with about “4,000 chaps out there now.”

He showed me a sample of the leather used in his chaps. It was amazingly soft, and seemed to be perfect. He added that since he makes things by hand, he is able to make sure each piece is cut from the perfect piece of leather.

He contracts most of his work out, working under another company. The items he makes are shipped out to the customer as soon as they are finished. We do mostly gun holsters for this company, making about two or three each week.

In a new show on TNT, they are carrying two of the gun holsters which Randy has made.

“Many well known celebrities, and also a museum in New York, they have many items that would have been used in reenactments. That’s pretty cool!”  The list is quite long.

A museum in Arizona recently did a tribute to John Wayne, so The Searcher’s sheath for Wayne’s gun was made by Gropper.

Randy learned the leather business from a well-known saddle maker many years ago.

Each piece of custom leatherwork made by Randy has his signature stamp on it, which allows it to be identified. Randy, however, doesn’t need to see the stamp to recognize his own work.

It can be seen in a vast list of movies, and Randy knows his own style. “Every leather guy has his own style, and I recognize my own work when I see it.”

“It is a dying art, there aren’t many guys doing it. I think I’ve worked out all the bugs so people are happy with my work.”

“The bench that I learned to do leatherwork on is the same bench that Roy Roger’s and Dale Evans’ saddles were made on. It’s cool to go back to see the history.”

It’s amazing to think that items made in a little custom leather store in downtown Martin are being sent around the world. He’ll tell you all about it if you stop by for a cup of coffee!