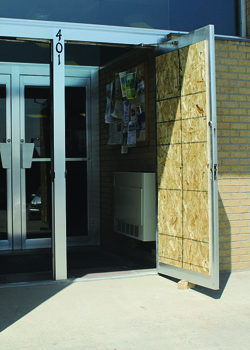 Assistant City Police Chief Tom Chester reported that a suspect has been arrested and jailed in Friday morning’s attempted burglary at Security First Bank in Martin.

The glass of the outside bank door was broken, but the suspect did not make entry into the building.

The incident was called in at approximately 5 a.m., when Officer Thomas McMillan was responding to a different call that unknowingly referenced the same suspect.

Citizens approached McMillan and reported the damage to the bank door. McMillan responded to the call for the bank, and found the glass broken. Evidence found on scene led to the same suspect who was originally being sought.

After completing the investigation for the incident at the bank, McMillan continued to locate the suspect.

He was found with the help of another citizen, was placed under arrest, and is currently in jail. McMillan stated that he appreciates the help of the local citizens.