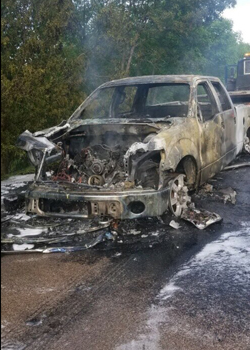 Photo Captions: A vehicle which was stolen out of Pennington County caused an accident on the west edge of Martin on Thursday, June 13. The occupants fled, and were subsequently apprehended at separate times.

While attempting to flee a related accident at Martin, the driver of this stolen pickup eventually was apprehended by the Oglala Sioux Tribe Department of Public Safety, when the vehicle caught on fire.

On Thursday, June 13, 2019, at approximately 4:44 p.m., Martin Police Officers received a traffic complaint of an erratic driver who was swerving in and out of oncoming traffic. Officers got a description of the vehicle and responded.

Law Enforcement observed the vehicle traveling at a high rate of speed eastbound on Highway 18 approximately a half mile west of the City of Martin. Before law enforcement could attempt to make a traffic stop on the vehicle, the vehicle collided with another causing an accident.

One first responder was forced to jump out of the way of the oncoming maroon pickup truck. Martin Police officers immediately initiated a vehicle pursuit on the vehicle and gathered further information that the maroon pickup truck had been stolen in the City of Martin.

Law Enforcement, including the Oglala Sioux Tribe Department of Public Safety (OST DPS) pursued the vehicle onto Tribal Land. The vehicle caught fire while fleeing law enforcement and was eventually forced to stop.

The suspected male individual was arrested by the OST DPS for tribal charges. Law enforcement was able to determine through the investigation that this male individual was the driver that caused the accident within the City of Martin and also had active arrest warrants.

Officers investigating also confirmed the first wrecked vehicle the suspects fled from was stolen out of Pennington County. The Martin Police Department will file charges with the Bennett County State’s Attorney’s Office on the male individual for numerous felony charges.

The Martin Police Department acknowledges the additional responders: the Martin Volunteer Fire Department, the Bennett County Sheriff’s Office, the Oglala Sioux Tribe Department of Public Safety, and the numerous citizens that stopped to help at the accident scene and reported this dangerous driver to law enforcement.