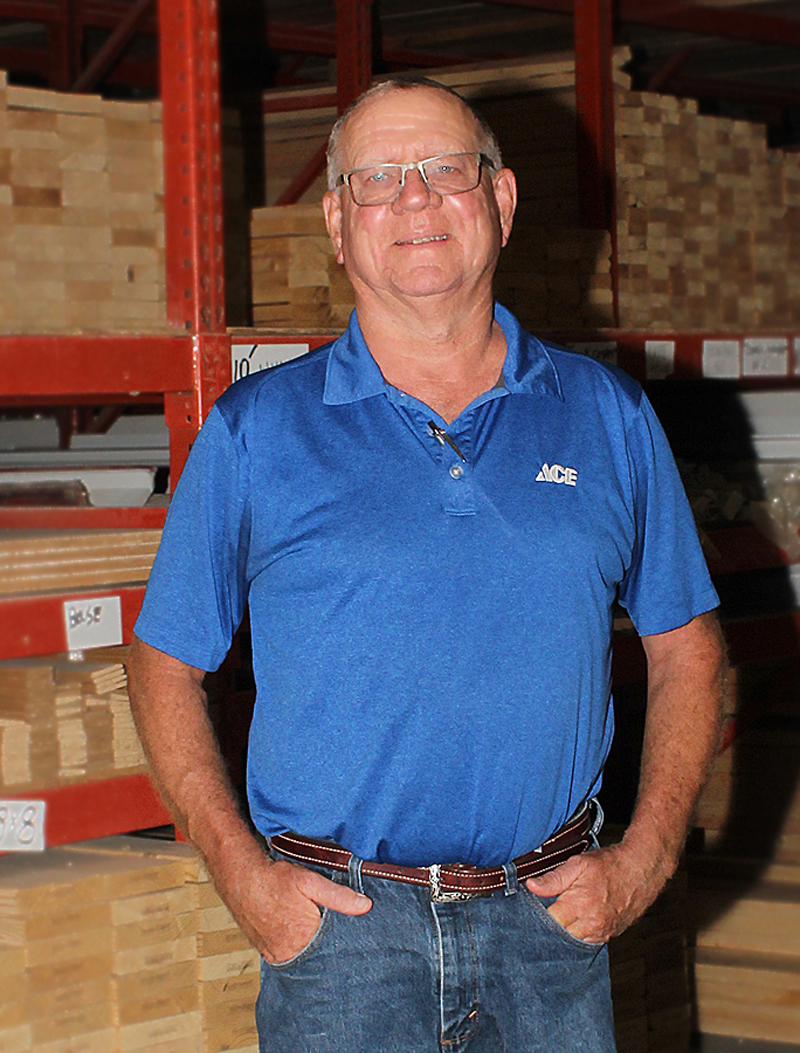 “Right now I’m having fun and I’m not ready to retire. It’s a good gig! I’m happy staying where I’m at.”

Thirty years of owning the local Ace Hardware/ The General Store, is not long enough for Dave Jones. Dave and his wife, Mary, took over complete ownership of the store on August 1, 1989.

Jones and Dale McDonnell had built the business in partnership almost ten years prior to 1989. The plan was to continue the original partnership for ten years, and they almost made it that long! Nine and a half years after they combined forces, the Jones’ bought out the McDonnell half of the business.

According to Dave, “We purchased the old lumberyard in about 1983, and incorporated that into the business of Ace Hardware. Parkview Apartments is where the lumberyard used to be. The original store was on Main Street where Butch’s is now. It was the old Coon Chevrolet building.”

“In 1994, Mary and I bought the current building, which was Coon Chevrolet, too, after they went out of business.”

“We moved everything from the hardware store and lumberyard here after they sold the old lumberyard proper to Dale, and he put up the apartments.”

The business has seen many changes during the past 30 years, with the biggest being the developments in technology. “The biggest change was when we computerized in 1990. Then, in 1993 we bought our complete computer system. We were the first business in town to have scanners at the point of sale, and we had one of the first fax machines!”

Jones appreciates the advances technology has brought to the business world. “Being able to communicate electronically is great.”

“With my phone, I can go out on the floor, and if I’m out of something, I can bring it up, and it will tell me how many are in our warehouse in  Colorado Springs. I can instantly order it right then from the floor.”

“If I’m out in the country, and have cell service, and if I know the item number, I can order it from anywhere I’m at. Some people don’t want to have anything to do with technology, but I couldn’t be without it.”

Dave and Mary have a current crew of about ten employees. He had high praise for them. “The good Lord has blessed me with the best staff I’ve ever had. I’ve got really good people. I’m very proud of them. I get many compliments on them. They are very faithful and dedicated. It makes my life so easy.”

When asked what he saw for himself coming down the line, he could not see retirement in the foreseeable future. “Mary works at IHS, and is not planning to retire, so we are not looking to make any changes. I’d like to keep going as long as my health keeps up.”

In closing, Jones stressed the importance of his local customers, and how they enable the store to donate to local causes.

“I really am very thankful and appreciative of the good customer base we have, people who are faithful to us and to small town businesses. Because of them, we make a lot of donations and help the community.”

“Out-of-town businesses don’t do that. It’s a smaller and smaller group of us who are doing that. Our local customers give us the ability to give back to the community.”