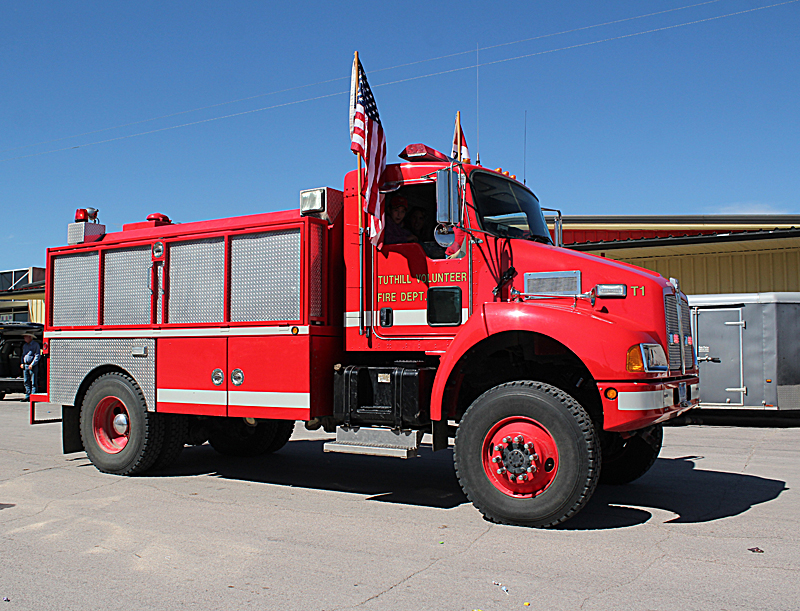 In honor of October being Fire Prevention Month, we are acknowledging our local fire departments. A short 70 years ago this spring, the Tuthill Volunteer Fire Department was chartered. In 1949 Jack Knecht donated a building to the department which was torn down, with the lumber being used to build the present building, according to the Bennett County history book.*

In an article from the October 18, 1989, Bennett County Booster, the building of a newer fire hall is mentioned, with more stories of the department:

The ongoing construction of a new Tuthill Fire Hall and the upcoming Tuthill Volunteer Fire Department fund-raiser provided an opportunity for long-time Tuthill resident Roy Farmer to reminisce about the local department’s beginnings 40 years ago.

Farmer said, “I and Lyle Francis were the first ones to start it.” He recalled a 1950 trip to Martin for the purchase of an old Model A and two chemical tanks including a push cart that is now displayed just outside his home in Tuthill. The chemical tanks used a soda and water mixture to provide pressure and extinguish fires, Farmer explained.

“When we drove that old Model A into Tuthill,” he continued, “a guy made fun of us, and Lyle said, ‘A baby’s got to crawl before it’ll walk’.”

Years later, the Tuthill Fire Department is continuing to crawl, walk, and run into the future. The department still serves the rural community, and still holds its annual smoker fundraiser.

The Tuthill Volunteer Fire Department Smoker will be held this Friday, October 18, beginning at 5 p.m.