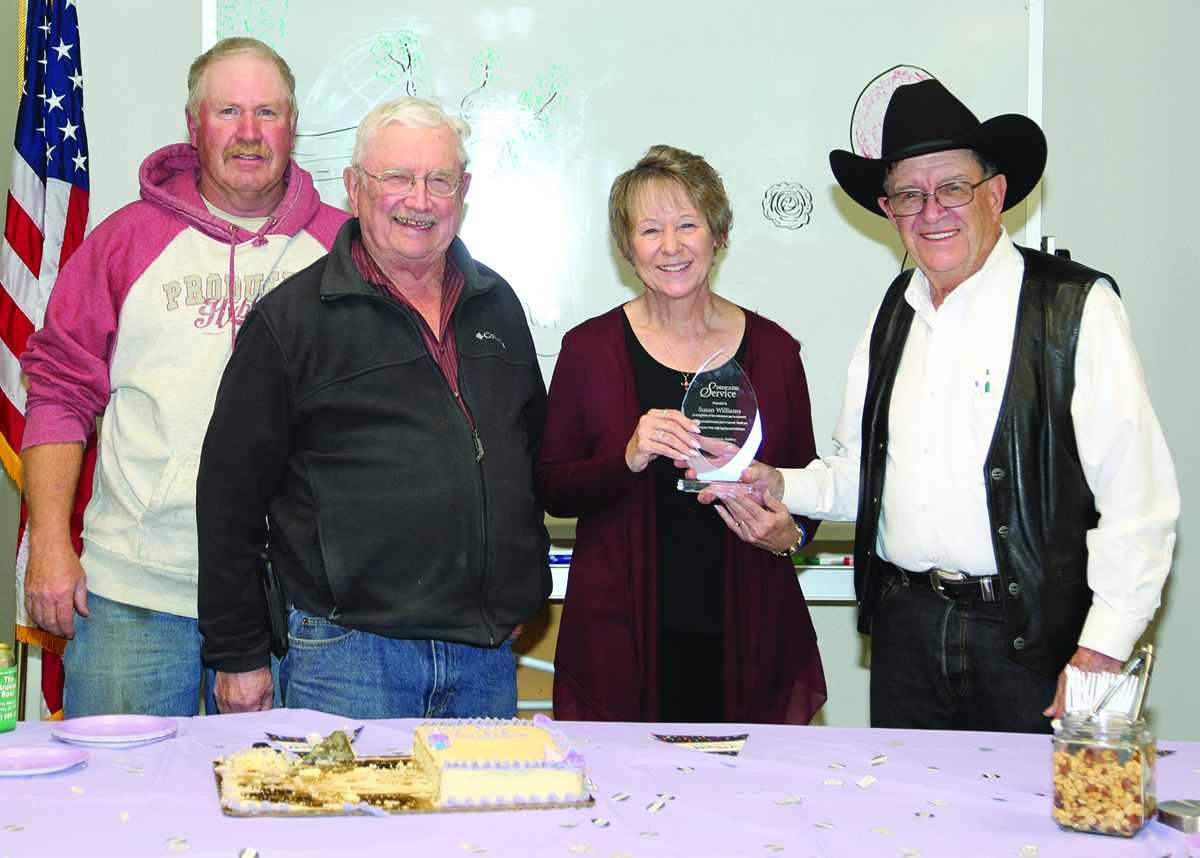 After 27 years of public service, most all as the Bennett County Auditor, Susan Williams recently retired to the quiet life of living in the country.

She was sworn in at a regular county commission meeting on May 19, 1992, by commissioners Raymond Kocer, Jimmie O’Neill, James Slattery, Robert Harris and Fred Crittenden.

With little training in her pocket, she was trained by the Gregory County auditor which lasted all summer and into the fall.

At that time, Bennett County was going through an audit by Al Shaffer with the state.

“Al has audited the county several times since and right now,” said Williams.

After Williams was appointed to the auditor position by the county commissioners, she would  then have to run for election, since the auditor’s position is elected by the people. She said she was only contested three times over the 27 years and not once since 2006.

Prior to working at the auditor’s office, she worked for Dr. Gunner as a dental assistant for eight years. Before that, she was a ranch wife.

“Being a ranch wife was a great life, but not a great way to make a living, especially in the 80s,” said Williams.

“Some of the biggest changes at the auditor’s office over the years was in regards to elections,” said Williams. “Elections can be the most scary thing, but the best thing you’ll ever do. There are so many laws, so many people, an election, it is important...very important.”

She said prior to getting the tabulating machines for election results, they could be counting votes until 2:00 to 3:00 in the morning, depending on the election. Eventually they were required to get the new machines and the city and school went in on the cost, which was $5,000 per machine at the time. They have two of the machines, which is good, because now the machines cost up to $100,000 each.

Another big change was when they changed the legislative districts. Bennett County used to be in two districts, 26 and 27, and now are in just District 27. Another change was the county going from electing commissioners from districts to at large voting.

The County Auditor as the clerk of the County Commissioners is required to keep an accurate record of official proceedings and preserve all documents, books, accounting records, and maps. The Auditor schedules appointments, prepares the agenda, and prepares the legal notices required for publishing.

The County Auditor is in charge of the accounting functions for the county. These include: accounts payable, payroll and employee benefits, fixed assets and inventory records of county property, prepares monthly and annual financial reports, assists the County Commissioners with annual budget, calculates the tax levies for all taxing entities in the county, and apportions the taxes collected by the Treasurer.

New County Auditor Angie Hicks worked under Williams as the deputy auditor prior to her retirement, and complimented her former boss for not only her training, but how she treated her and others.

“I wouldn’t be able to do my job without her,” said Hicks. “I can call her and she can walk me through things, anything. She’s been awesome, very supportive and always so kind.”

(See p. 1, 11-27-2019 edition for full text) To subscribe to the digital edition, https://bennettcountyboostersd.com/subscriptions