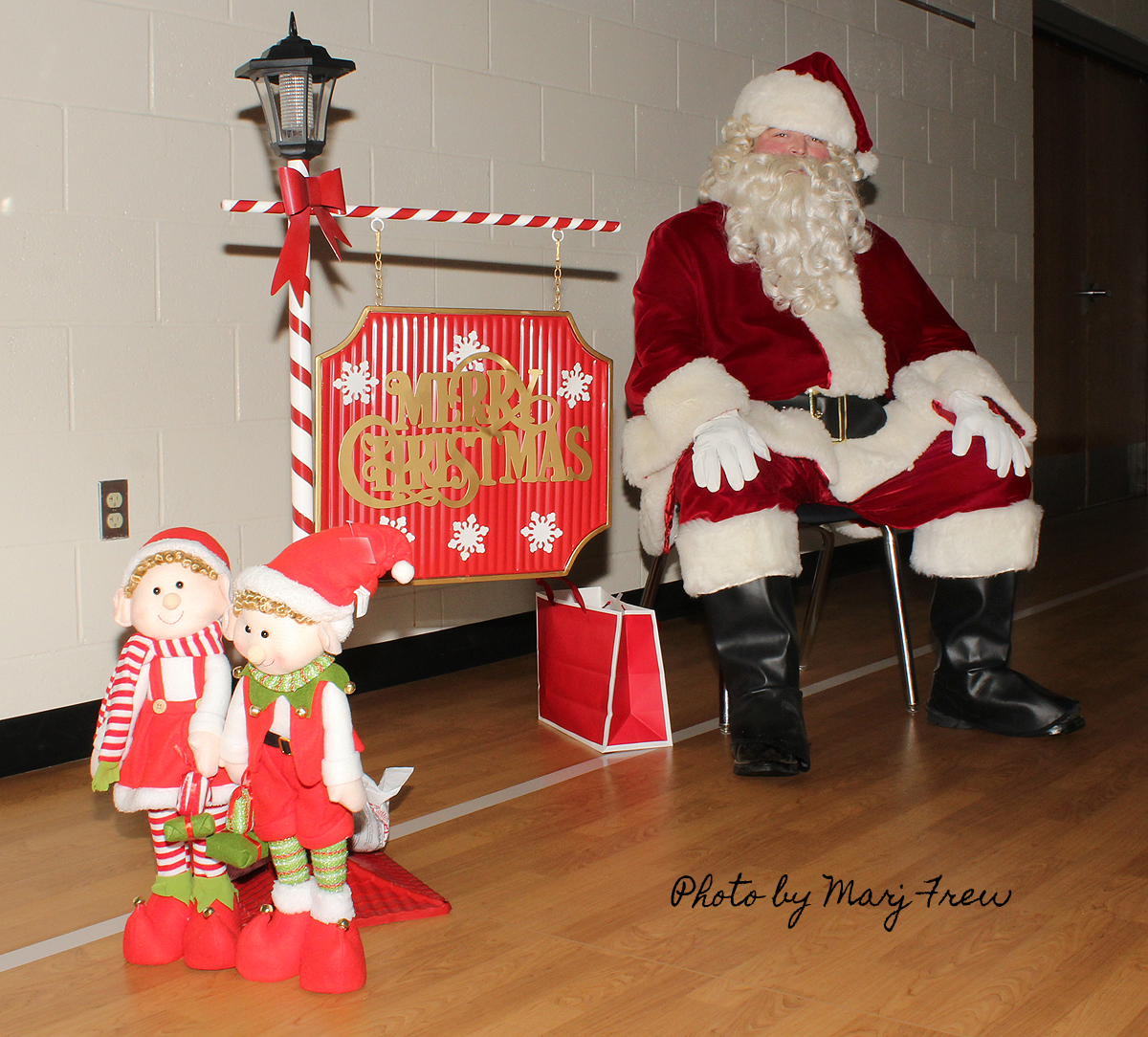 Photo cutline: Santa’s helper arrived in Martin just in time for the Chili Feed on Friday night. His signature “HO, HO, HO!” might sound a little bit younger this year, but it still comes straight from his heart.

Filling Santa’s helper’s boots is not an easy task, but with the passing of his father, Tyler Nollett has stepped into that role rather naturally.

For the past 50 years, Tyler’s father, Louie, played the role of Santa’s helper in Martin for the local Christmas events. Before Louie passed away recently, he wanted reassurance that Tyler would inherit the role. “My dad gave me some guidelines before he passed,” reflected Tyler, following his first appearance as Santa’s extraordinary helper at the Chili Feed held Friday, November 29.

As Santa’s special helper entered the Activity Center on Friday, his booming “HO, HO, HO!” filled the air, and the attendees gave him a round of applause.

The children were greeted by the jolly old elf, complete with his naturally rosy red cheeks, and he asked each child what they wanted for Christmas, and handed out candy canes.

When Santa’s helper visited with me, he still had a little chuckle in his voice as he shared the experience of becoming a special helper.

“Honestly, it’s interesting. Although a new wig and beard was provided, I chose to go with the original beard and wig. It actually still smells like my dad, which kind of gives me the Christmas spirit.”

While preparing for the event, Tyler found the magic of the character as he donned the same red suit worn by his father. “I felt like Santa Claus when I put on the suit, to tell you the truth. It’s a bit of a learning curve, somebody’s got to do it. I figured I  would just go with the flow.”

“Most of the kids were pretty shy, but one kid was real clear on what he wanted! A Nintendo Switch! The kids asked me where I lived, and of course I told them the North Pole. ‘We want to go with you!’ they said. I told them, ‘It’s cold there, colder than it is here!’”

Although he felt nervous, Tyler explained, “This is something I wanted to do. I was nervous, I was really nervous, to tell you the truth. I practiced a fair amount on my Ho Ho Ho’s at home.”

“I wore the suit a time or two beforehand, but you know, once you put the suit on, and you become like Santa Claus….”

“One thing I’m going to have to get used to is everyone calling me Santa. As his helper, I’m just trying to live up to filling my father’s shoes. The funny thing is I’m actually wearing my dad’s boots, and they’re a little big.”

Tyler has been prepared for this role for many years. “I’ve heard from everyone since I was sixteen, asking if I was going to take over, and I would have bet that I wasn’t going to play Santa Claus’ helper, but things change. I never would have guessed in a million years that I would have be in these boots. I always thought Louie was going to live for 100 years.”