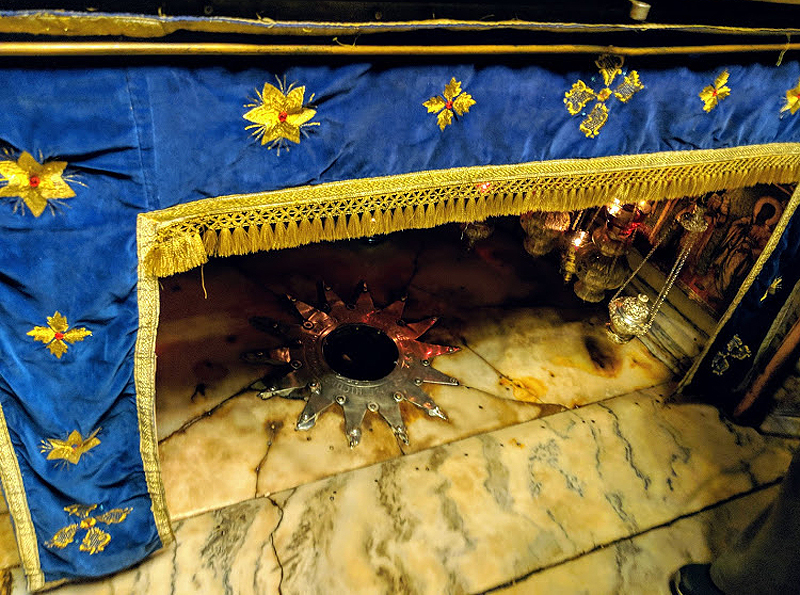 With Anne Lyon’s recent retirement, one of her goals was to travel. She has made good on that plan, logging close to 12,000 miles on her recent pilgrimage to the Holy Land in January.

One special part of the experience was making the pilgrimage with her close friend, Nora Hampton, from western New York state. “The journey was definitely not a vacation,” Anne explained. “We spent the entire time walking, learning, and in prayer constantly through the days. It was physically, emotionally, and spiritually exhausting. It takes all you’ve got. We were completely enveloped with taking in historical information, spiritual implications, and the experience of being at the sacred places. Your whole person is transformed in one way or another.”

The pair joined a tour group from the organization Casting Nets Ministries. The spark of the idea to travel to Israel came after Anne saw posts on Casting Net’s Facebook page from their 2019 pilgrimage. Casting Nets had given missions for both the Diocese of Rapid City and Our Lady of the Sacred Heart Church in Martin, so she knew Chris and Tony, the founders of Casting Nets. Anne is a member of the parish in Martin, and has been involved with the music ministry of the church most of her life.

After careful consideration, Anne found that all the stars lined up exactly as needed for her to take this special trip. Her travels began with a flight from Rapid City to Newark, N.J., where she met up with Nora, and they continued on an 11 hour flight from Newark to Tel Aviv, Israel. Jet lag didn’t have a chance to set in before the pair joined the tour group of thirty people, six of whom were from South Dakota: Doug and Sandy Stukel, Burke; Rose Wells and Joan Grim, Gregory; and Peggy Westrich, Rapid City. The ensemble visited many sites of importance to Christianity.

The first three nights were spent near the Sea of Galilee, at the Sea of Galilee Hotel. On the first day they visited the cave where Elijah heard the Lord, and then proceeded to the top of Mt. Carmel, where Elijah defeated the false pagan priests. “This was one of my favorite areas, as it was very lush. Much of the area is more barren. We did a lot of walking, usually uphill on uneven stones. We averaged about five miles per day.” Their tour guide, Rami, is one of only 50 guides allowed from the West Bank area. The political divisions and reality of life in the area was apparent throughout the trip.

The second day began with the group seeing a first century fishing boat that was uncovered from the mud in the 1980’s. The boat would have been similar to what Jesus would have used.

The travelers then took a boat ride on the Sea of Galilee. “The Sea of Galilee was not that big, it seemed more like a large lake. All around the Sea were communities where Jesus ministered.”

The next stop was a tour of the synagogue at Capernaum, which is where Jesus read the scrolls and then taught. The group also visited the Church of St. Peter and Paul, which included seeing the excavation of St. Peter’s home, as the church is built directly above St. Peter’s home. “At this site, we were able to look down through a special glass portal to see the interior of  St. Peter’s house. Jesus most likely spent much time with Peter while he was in Capernaum. Most of the locations we visited were low in the ground, since other structures have been built over the top over the years. We learned that most of the historical sites we visited are under the care of the Franciscan Order.”

Day two ended with a visit to the Mt. of Beatitudes, and to the site where Jesus asked Peter, “Do you love me?” Mt. Tabor was their final tour of the day. This is also the site of the Transfiguration.

Day three began with a tour of Magdala, a recently discovered ruins of the village, which is a place that Jesus certainly would have preached and ministered in. This is the birthplace of St. Mary of Magdala.

Anne remarked, “One thing that meant a lot to me was prayer time that we took at the Encounter Chapel in Magdala, which is part of the Duc In Altum Spritual Center. We prayed with and for each other as we gave our burdens to the Lord, trusting Him for healing. It was a day full of prayer and holiness. The chapel features a mural of the moment when a woman touched the garment of Jesus. I began to feel walking with Christ in a whole new level of intimacy.”

The group continued to Tabgha, the Eremos Grotto, where they visited the Church of the Multiplication, which is the site of the feeding of the 5,000. The Eremos Grotto is the only natural cave on the north side of the Sea of Galilee, which is how it is known that Jesus prayed there. It is also called the Jesus Cave. Their group’s tour guide explained that this location has natural acoustics. If you stand on the shore, facing land, you can easily be heard. But this is not where Jesus stood. He climbed to the top and defied the natural order of things. He was challenging nature.

The next stop was Ceasarea Philippi, which is the ruins of the ancient pagan temple to Pan and the gates of Hades. This area would not have been a place where Jesus and his disciples would have normally traveled to, due to all the social restrictions in His time.  In Matthew 16, Jesus brought his disciples on the long journey to this place to have an important conversation, “Who do you say I am?” Simon Peter answered, “You are the Messiah, the Son of the living God.” It was here that Jesus ordered his disciples not to tell anyone that he was the Messiah.

“Having been here, at this location, I can picture what it really looks like when I listen to scripture now. The setting is a reality. I have heard the birds, seen the flowers, walked the same paths.”

They concluded their third day with Mass at Cana. This was the home of Nathaniel, and the place of the second sign in John 4, and turning the water into wine at the wedding feast in John 2. The couples on the tour renewed their wedding vows at this location.

The group next travelled by bus to Jerusalem and Bethlehem to begin the next portion of their pilgrimage. They stayed at Saint Gabriel Hotel. Many of the photos shared along the way were of the interesting food choices. One such delight was a variety of desserts. As Anne explained, “Soooo many good desserts tonight to choose from! Trying my best to be an equal opportunity eater.”

“Seeing where Mary lived was an inspiring, humbling experience,” Anne remarked. “I had a lot of perceptions changed from what we learned from our tour guide. Jesus’ manger, for instance. There were no wooden mangers, only stone. Everything was stone. Somehow in the translations of the stories, details were changed. When Mary and Joseph traveled to Bethlehem, there was no such thing as an Inn. It was tradition that when you traveled, you stayed with relatives. Joseph had many relatives they could have stayed with, but what might be more the case, the relatives’ homes were probably packed full of people. Their homes were built in caves, and at night, the livestock was brought in and kept at the back of the cave for protection and warmth. The people lived toward the front of the caves. When Mary and Joseph arrived at one such home, they were more likely brought to the back of the cave, where it would have been quieter. We also learned that the shepherds which the angels appeared to would have been Levitical Shepherds, because the flock of Bethlehem, only a few miles from Jerusalem, were the sheep used for proper sacrifices at the Temple in Jerusalem. Those sheep born at Migdal Eder were destined to be slaughtered one day as part of the divine instructions for temple worship! They were born to die as sacrifices!”

The tour continued to the Church of St. Joseph, the workshop of St. Joseph and part of the home of the Holy Family. Tony Brandt, one of the tour leaders, gave a reflection on the many virtues of St. Joseph. “Another misconception of our time is that Joseph was a carpenter who worked with wood. There was no wood. It is more likely that he was a stone mason, who worked with stone. Somehow that came to be translated as what we think of as a carpenter.”

Day four also brought the group to the House of Mary, the Synagogue of Nazareth. They toured the House of Mary where Catholic tradition holds that the Angel Gabriel visited the Virgin Mary. Mary’s response: “To do Your will, O my God, is my delight, and your law is within my heart!”

To bring day four to a close, they walked to the synagogue which would have been like Jesus’ home parish. This is the place that Jesus chose in Isaiah 61 to read and announce himself as the Messiah.