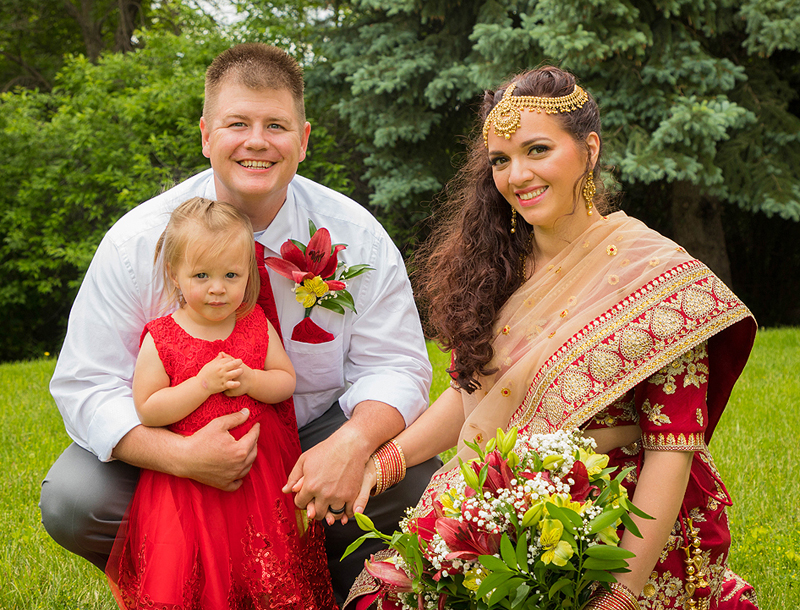 Father’s Day, June 17, 2018. That special day was also graduation day for Sadia Malik, of Martin, as she would be receiving her Bachelors Degree in teaching at the ceremony from Oglala Lakota College in Kyle.

During her rush to get ready for the occasion, and making sure everything was just right, Justin Risse, her partner, realized something was missing. As Justin recalls, “She doesn’t need to do anything to look good to me. I told her she was missing something, and I took a knee and told her how much she meant to me and our daughter Prevah, and asked if she would marry me.”

One year later, on June 22, 2019, Justin and Sadia were married in a beautiful ceremony held in the back yard of Justin’s brother, Aaron and Stormie Risse.

Justin grew up in Martin, and Sadia graduated from Little Wound High School, in Kyle. Sadia explained, “I then went to Brookings, and then after switching my major, I came back to Martin, since my sister, Binti lives here. I was figuring out what I wanted to do, and was working at the Legion Club. I decided to go into teaching, and Stormie was also an Education major, so I was hanging out with her, and was around Justin more.”

“It was a few years after that when we actually started seeing each other,” added Justin.

Their first date was a double date with Aaron and Stormie to a Little Big Town concert in Rapid City. Justin explained, “They had some extra tickets, and asked if I wanted to go. So I also asked her, and that was our first date.”

Sadia remembers, “We also saw Maren Morris, it was one of her first concerts, so it was a really great concert. It was really fun.”

“I never really thought about getting married when I was growing up,” said Sadia, “but I always knew that if I did, I wanted to mix my culture with whoever I was marrying.”

“My dad is Pakistani, he was born and raised there. I  grew up with his culture, and his religion, as he is Muslim. My attire was a traditional Lehenga Choli, which is one type of dress that is worn by some Indians when they get married.”

Sadia continued, “Justin and I decided to do a mesh of both cultures. We found a place in India for purchasing my dress, and all of my bridesmaids’ dresses. It was less expensive than buying one traditional wedding dress. I’m not sure where I will wear it again, but I do love it. The jewelry came from Britain, and was traditional style.”

The couple explained that Justin’s cousin, Brooke Bair, got ordained in order to marry the couple with a small ceremony with close family and friends.

Sadia explained more of the traditions she brought from her heritage. “On my hands was a henna dye design, which was done the night before the wedding. It’s like the last night before the bride leaves her family. All the females in her family come and visit and tell stories. That’s when you get the henna done, it’s like a bridal shower.”

“You hide your groom’s initials in your henna design, in your language, and then he’s supposed to find it.” When asked if he had trouble finding it, Justin said, “Yes, and no. Because it wasn’t an actual alphabet, it wasn’t something that I was accustomed to, I guess. But I did find it on her hands.”

On the challenges of being newlyweds, Justin explained, “The biggest change for us is that now our decisions are made with the entire family in mind. Most of our activities are family oriented, such as hunting. Sadia got her first deer last year.”

Justin added, “I am more cognizant of asking, rather than just doing. There are a lot of things, such as, I like to let them know what I am doing. The biggest thing is that we are parents. And, we are excited to announce that we are going to add another one. Our family is expecting another baby in July.”

Their daughter, Prevah, is a busy two-year-old, and also added to our interview when I asked her how old she was.

The family had a weekend getaway to the Omaha Zoo for a little honeymoon trip following their wedding. Justin added, “It was more like a family getaway than a honeymoon. Prevah loved it! We’ll have some time later for ourselves. For now, we are both enjoying being at home just being a family.”