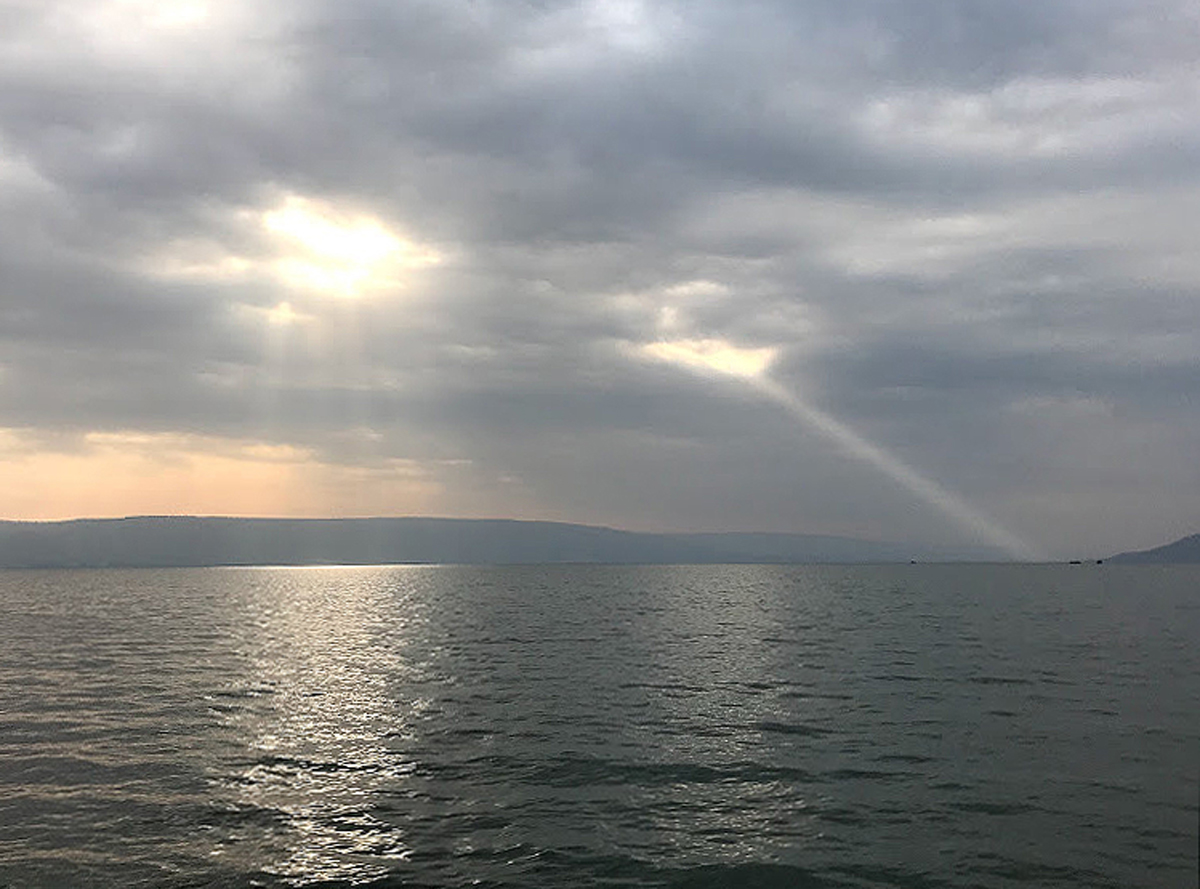 Day five was like another Christmas, which was still in full swing, due to the Greek Orthodox Christian calendar.

The group celebrated a Christmas Mass at St. Catherine’s Church in Bethlehem. Members of the group took turns reading Scripture for Mass, and today Anne had the honor. “I got to lector, which was awesome.” The church was right next to the Church of the Nativity, which the group toured next. It is the very spot where Jesus Christ was born. This is the one location that all religious groups agree to being the actual, specific location. It was kept intact from the very beginning. A small opening under an altar allows visitors to reach down about 12 inches to touch the actual ground.

Following that, they went to Shepherds Field, fellowshipped at a local restaurant, and capped off the night by visiting the homes of Palestinian Christians for dinner. “It was very special to share a meal at these homes. We broke into groups of five or six people. It was wonderful to see the real life of the people who live there. Some residents at the home we visited spoke English, and they gave us a tour of their home. Homes are generally built up, adding levels for additional family members.”

Day six, and the experience continued to be amazing. The pilgrims visited the Tomb of Lazarus, the Home of Martha and Mary, and saw the Valley of the Shadow of Death. They were able to enter Lazarus’ tomb, and then stopped at an overlook of the famous valley of Psalm 23 on their way to Jericho.

At the Jordan River, Mass was celebrated at the place Our Lord was baptized. “This experience was very powerful. We renewed our baptismal vows at the river. Some people from other groups were completely submerged, but only one of ours was. Most of us had the water poured over our head in the ceremony. I brought some of the water from the river home with me. This is the area where people audibly heard the voice of God. To just be still and know that God actually spoke here is an experience that I can’t even describe with words.”

This was also the spot where Joshua led the people into the Promised Land and where Elijah was taken in a fiery chariot. The group went to see where the Dead Sea Scrolls were discovered at Qumran. The day also brought a unique experience, as they took time to float in the Dead Sea and took advantage of the famous mud. Some participants used it as a mud pack, which is internationally known to be cosmetically advantageous. A double rainbow appeared over the water as pilgrims were in the water.

Day seven began with a Palm Sunday Walk at the top of the Mt. of Olives. This was the last place the Lord was as He ascended. They then walked the Palm Sunday path all the while overlooking the city of Jerusalem.

At the Garden of Gethsemane they saw olive trees which were over 2,000 years old. Only eight trees remain from the original grove, which survived from when the Romans destroyed Jerusalem. More have grown since that time.

They had Mass around the rock that Jesus Christ wept over until He sweat blood. After Mass they gathered around that rock and prayed for all those petitions of prayer that were brought with the group.

The pilgrims took a bonus trip to the site of the Assumption of the Blessed Virgin Mary. It is also is the resting place of St. Joachim and Anne, Mary’s parents and Jesus’ grandparents. This location was of particular importance to Anne, who was named for the mother of Mary.

Day seven ended at Mt. Zion, visiting the Basilica of the Dormition, which is where Mary spent her last moments of life. They then went to the Upper Room where three sacraments were instituted, and where Pentecost occurred. They continued on to St. Peter in Gallacuntu, which was Caiaphas’ house, where Jesus was kept in a dungeon His last night of life.

“Another common misconception of our time is about the details of the crucifixion. The bottom part of a crucifix was actually was at ground level, which allowed people to spit on the person being crucified. The cross was just big enough for a body to be nailed to. Most bodies were just left to the elements, and not taken down. The three crosses at Jesus’ crucifixion were only taken down because of Passover. Herod would have been coming to Jerusalem, and he was afraid of unrest. So, the soldiers broke down crosses, and got rid of them by throwing them into a cistern, along with all the hammers and tools.

The group’s Via Dolorosa ended at the empty tomb of Jesus Christ where they celebrated the Solemn Mass of the Resurrection at the Church of the Holy Sepulchre, regarded as the holiest site in the world for Christians. Mass was concelebrated by several priests, with their own chaplain giving the homily. They were able to venerate the tomb. “You never come out of the tomb the same,” was the common observance.

Day eight ended at the Church of St. Anne, which is the birth place of the Blessed Virgin Mary. They also visited the Western Wall, which is a remnant of the retaining wall of the Temple. “We saw many joyous celebrations in this area. At the Western Wall, it was interesting to see the pieces of paper up close, which were prayers placed in the wall by people. Many Jewish people were saying their prayers here.”

The final day of the pilgrimage was spent at the Valley of Elah, Ein Karem, the birthplace of St. John the Baptist, and the Visitation. The day started with picking up three smooth stones from the stream where David met Goliath, “to take down their Goliaths back home.” They were allowed to bring the stones home.

After returning home, jet lag finally caught up with Anne, who reports she is still digesting the experience, and is still settling in. “If anyone is ever presented the opportunity to go, do it. You will never regret going. Everyone who makes this trip will be transformed in one way or another. I loved the connection of all the members of our group, and that we grew to know and love each other. To me, the pilgrimage was like having someone as a pen pal, and then after many years, being able to visit them at the home where they live. You gain a whole new perspective about who they are, and the context of your conversations with the, but on a much deeper level.”