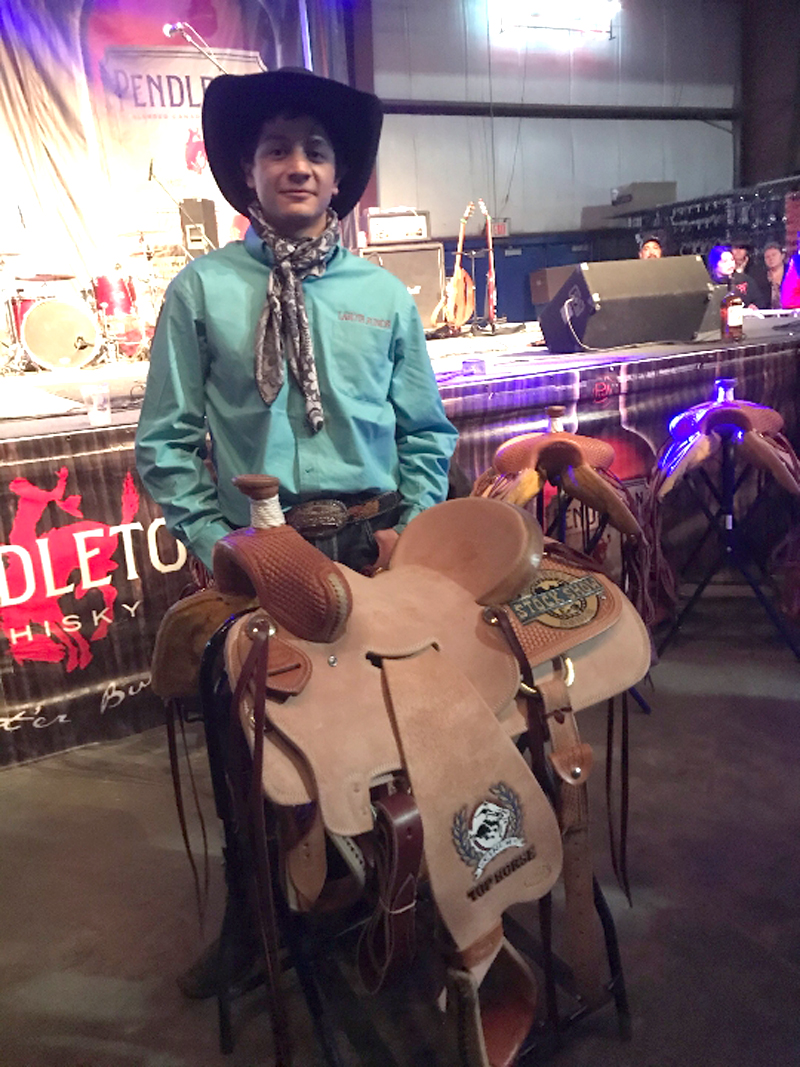 His team, representing Blake’s Trailer Sales, had a strong morning in the preliminary round, as they finished the trifecta event of stray gathering, trailer loading, and doctoring in well under the five-minute time limit. The team’s winning streak faded in the evening’s performance, but Wilson was still recognized for his abilities as a top hand.

The region of South Dakota Badlands was well represented in the ranch rodeo awards ceremony. Not only did a man originally from Interior win the Top Hand Award, a horse belonging to an Interior man was honored.

Charlie Risse is the proud owner of the palomino gelding “Chaos,” who so impressed the judges as to win the Top Horse award in a field of over 140.

“He’s probably my favorite around here. And the go-to, of course. If I need to go rope something big or drag something in the trailer, or something I need to feel safe sorting on, he’s the guy I go catch,” Risse said.

Despite technological advances in ranching, there are some situations that simply require a cowboy and a good horse. A dependable partner is crucial, especially in dangerous situations. “We have a lot of rough country that you can’t get to with side-by-sides or four-wheelers. A lot of Badlands and stuff like that. You’ve gotta load cows on trailers. Every once in a while, rope and tie stuff down. He does a lot of brandings and sorts a lot of cows and calves in the fall.

“This fall, my neighbor had 2,500 pound, old longhorn steers, some Badlands runners, that we had to go chase down and rope them and load them in the half top. He’s pretty good for stuff like that,” Risse said.

A few ranch rodeo events were small beans for Chaos, compared to a regular day’s work. “That was a day off for him,” Risse said.

What Chaos’s papers may lack in pedigree, he makes up for in color and heart. “He’s out of a grade mare and a Shining Spark stud. He’s always been. . . a hell of a horse,” Risse said.

The two have had a special bond from birth: “He’s actually the first one I myself raised,” he said.

Risse joined up with his brother, Jesse, Guy Fransua, and Tagg Petrak to form the Lakota Funds team. The men finished fifth overall.

McPherson auction was the 2020 champion team for the second year in a row, with members Marty McPherson, Brent McInerney, Tanner McInerney, and Clint Nelson contributing to the victory.

Rollie, Charlie, and the members of the winning team each took home a new saddle, along with other prizes.