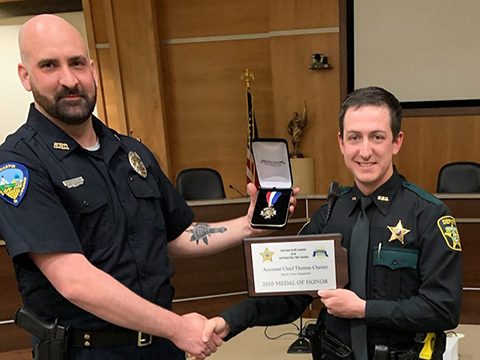 The Medal of Honor is given jointly by the South Dakota Police Chiefs’ and South Dakota Sheriffs’ Associations and is for law enforcement officers who willingly distinguish themselves through an act of courage, involving a risk of imminent serious injury or death, for the purpose of saving or protecting a human life or while taking an armed and immediately dangerous suspect into custody.

The recipient of this year’s Medal of Honor is Assistant Chief Thomas Chester, Martin Police Department (Now working with the Brookings County Sheriff’s Office). The following summary of events is from the nomination form submitted by Officer Nate Eisenmenger, Martin Police Department. In 2019 I investigated an officer involved use of force/assault against law enforcement case for the City of Martin Police Department. During the investigation I reviewed and collected video and audio footage collected from law enforcement body cameras as well as nearby business surveillance footage. An interview was conducted with the subject involved and the officer involved.

In 2019, off duty Assistant Chief (AC) Thomas Chester was dispatched for an armed male in the City of Martin. AC Chester responded immediately, was able to make contact with the male subject, and observed the male armed with a knife. AC Chester stayed in contact with our dispatch center and gave details on the situation. Assistant Chief T. Chester made multiple contacts with the male while in his patrol vehicle and out of his patrol vehicle. The armed and suicidal male failed to obey all of AC Chester’s commands.

I truly believe Assistant Chief Thomas Chester’s actions prevented two deaths that morning. This includes the death of a citizen the subject was going to fight as well as the subject’s own death as Assistant Chief T. Chester was more than justified in using his own deadly force to protect himself and others.