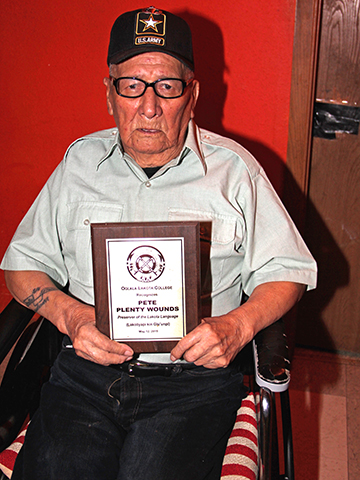 I had the fortunate opportunity to meet Pete Plenty Wounds, Sr. at his home in Batesland, S.D., where he lives with his daughter and two sons. He was dressed neatly in pressed Army attire and sat erect in his wheelchair. “I use this wheelchair to go around the house. Sometimes when I go out, I use crutches or a short stick because I can get off balance, you know,” Pete explained to me.

Pete endured a precarious beginning. While his parents were making the eight-mile journey from Porcupine to Wounded Knee to visit Pete’s aunt, his mother experienced labor pains. “It was windy, so my dad took us to Porcupine Butte. I was born there on June 3, 1930. People call me Pa-Hin, which means Porcupine in Lakota,” Pete explained to me.

Pete grew up in Wounded Knee and enlisted in the Army while the Korean War was in progress. He was 22 years old. He served as a paratrooper for two years; 1952-1954. “If you enlisted you only had to serve two years, but if you were drafted, you served three years, so I volunteered. I took my basic training at Ft. Benning, Georgia and after training I was stationed at Ft. Bragg, North Carolina,” Pete said.

During his Army career, Pete made 28 parachute jumps. When I asked him how he felt when he jumped, he responded, “I was never afraid of heights so it didn’t bother me, but some of the guys didn’t want to jump. Since it was mandatory to jump and you could be court-martialed if you didn’t, they would just grab them and throw them out of the plane.”

While on active duty, Pete didn’t get the opportunity to go to Korea, but he was on the list to be deployed to Alaska to make jumps there; however, the mission was aborted.

You could see the pride in Pete’s eyes when he spoke about the six generations of his family who have served or are presently serving in the military. His grandfather was in the Civil War, an uncle was in World War II, Pete in Korea, his youngest son served in the Army during Desert Storm, a grandson who was a Sergeant First Class officer and, a Master Sergeant granddaughter currently serving in Afghanistan. “My Dad died before World War II so my uncle went. Otherwise, I’m sure Dad would have enlisted,” Pete said.

When Pete got out of the Army, he and his wife went to live in Gordon, Neb. with his mother. He worked on a ranch in Cherry County for the next 19 years. Sustaining an injury on the ranch, he quit and came back to live in Batesland. “I was married, but my wife died in 2004. We had five boys and two girls. We were married 53 years, three months and two days,” Pete said proudly.

Sixty-five years ago Pete and his brother-in-law established the American Legion in Batesland which, despite its aging membership, continues to be active today. Pete served as their Chaplain but is now retired.

Hunting is one of Pete’s favorite hobbies. He has hunted for pheasants, deer and antelope but stated that antelope is his favorite meat.

One piece of advice Pete bestows to others on how to live a long life is to exercise and eat the right food. When I asked him about any other pieces of advice he could offer, he said, “For a man? If you want to do something, you have to stay with it to get it done. That’s how I feel, you know.”

Pete received the highest mark a rifleman can achieve, is a master paratrooper and received a plaque from the Oglala Lakota College for being the preserver of the Lakota language. He is the last surviving member of his paratroop squad.

Just as I was leaving, Pete informed me, “Before I go over to the other side, I’d like to make one more jump. I know of an airport for small planes somewhere this side of Rapid City, down by the river, that lets people jump. I want to go there.”

Determination at best! Hat’s off to a man on a mission!