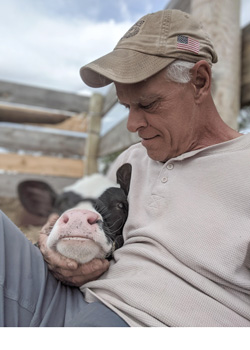 If the 20 unwanted, abandoned current animal residents at Tuthill Animal Refuge in Tuthill, S.D. could talk, I am certain they would tell me, “There’s nowhere else we’d rather be!” And I am just as certain that founders Stephen and Karla Parkes feel much the same way.

The seven-mile trek from Martin to the refuge is just a preview of what you will find once you get there. Located on 22-acres of pristine property, the refuge overlooks panoramic views of the plains and LaCreek National Wildlife Refuge to the south. As well, while driving to the refuge, a portion of the Badlands can be seen far off on the horizon to the north. The Parkes virtually stumbled onto the property about two years ago and set off on a journey to make extensive repairs to both the house and pole barn. Along with those renovations, they have also fenced the entire perimeter, put in metal gates, built roads and have educated themselves substantially on how to care for a variety of animals.

Adopting abandoned, unwanted animals is not a new adventure for Stephen and Karla. Prior to relocating from Divide, Colo., they were passionate providers for our four-legged friends for the ten years they resided there. It is easy to understand how Karla fits into this scenario since she has been a Nurse Practitioner and caregiver by trade for more than 30 years. Karla is employed by Bennett County Hospital where she is an emergency room medical provider. Watching Stephen interact with the animals, I surmised that he just seems to come by this naturally as if being an animal protector was his calling.

The pole barn on the refuge, home to four horses and two barn cats, was originally just a shell of a building. The Parkes made significant improvements in the barn to accommodate and provide additional comfort for their adopted animals. An internal, frost-proof yard hydrant for easier access to water was installed. Extensive electrical wiring was done to provide light while doing those after-dark chores, help with keeping water bowls ice free and when necessary, is particularly beneficial at times when evening medical care may be warranted. In the back portion of the building four 16’ x 16’ horse stalls were constructed out of 2 x 12” rough cut timbers to not only protect the equine critters from injury but the walls of the building as well. A smaller section was enclosed closer to the front of the building which stores all the necessary food items, tack and some other important paraphernalia. The barn cats enjoy all the comforts of home in the barn as well, especially during the winter months. Their cat houses are covered with warm blankets and the floors are heated by means of a heated pad.

Four adopted cats and four dogs share space inside the main house with Stephen and Karla. A room in the basement has been designated as the dog bedroom and houses the kennels which range in size from small to extra-extra-large. These provide a safe, warm haven for the dogs at night as well as on those cold winter days that prevent them from spending long hours outdoors. “Since the cats and dogs don’t always mix well together, in an effort to keep everyone safe, I spend a lot of time during the day rotating critters from inside to outside and vice versa,” Stephen said. “It’s a dog-in, dog-out, cat-in, cat-out cycle all day long.”

Petal and her stallion foal, Schufeldt, are the most recently adopted animals at the refuge. Like most animals that the Parkes rescue, their chances of survival were minimal at best. Since they have arrived at the Tuthill Animal Refuge, Petal has continued to gain back a substantial amount of the weight she had lost due to starvation and Schufeldt has been halter broke and is becoming a beautiful, well-mannered stud colt who truly loves to be rubbed over every inch of his body.

The Parkes provide a home for a family of four Dexter Cows, which were destined for slaughter that include grandma, mom and two sons. They also have recently added two Holstein cows to their herd.

According to Karla, who unfortunately I did not have the opportunity to meet, she feels that it is best to let animals be themselves and allowed to display their own, unique personalities. If you are an animal lover and an animal caregiver, it would be difficult to dispute this statement.

Stephen and Karla would prefer to be able to provide homes and care for all their rescue animals but, unfortunately, this is not feasible. Stephen stated that, “Animals demand a certain amount of love, care and utmost attention every day. Try as you may, for one person to be able to provide all of this individualized attention is virtually impossible.” This reasoning constitutes the necessity for the Parkes to utilize the services of LightShine Canine Rescue to help re-home many of their canine animals and they have proven to be beneficial in this respect.

Rockie Smith, DVM at High Plains Animal Clinic has worked extensively with Stephen and Karla on several occasions. “They strive to do what is best for their rescue animals,” he said. “They are sincere in their efforts and open to learning.”

This quote, by A.A. Milne, pretty much sums it up, “Some people talk to animals. Not many listen though. That’s the problem.”

Tuthill Animal Refuge is a non-profit, self-funded animal refuge. To learn more about the animals and the refuge, please visit their Facebook page.