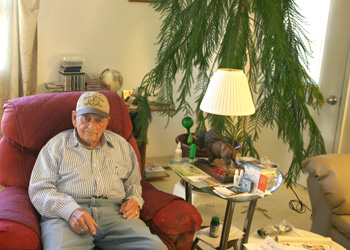 Traveling is Bill Erickson’s thing. Over the course of his life, this long-time Martin resident has been fortunate enough to have done some pretty extensive traveling.

I asked Bill, “If you could pick anywhere on Earth you’d like to live, where would it be?” He responded, “Martin!” This really didn’t come as much of a surprise to me because despite all the places Bill has traveled to, he has lived the majority of his 90 years in Martin.

William Martin Erickson, named after both of his grandfathers, was born in the country south of Martin close to the Nebraska border on November 10, 1929.

When Bill was very young, his parents moved to Merriman, Neb., where they ran a cafe for 10 years. Bill’s father and Harry Beck, editor of the Merriman Maverick newspaper, were instrumental in founding the Merriman City Park.

In 1940, when Bill was 11, the Erickson family moved back to South Dakota 12 miles southwest of Martin where they engaged in a farm/ranch operation.

The class motto for the Bennett County High School graduating class of 1948 was, “Forward ever, backward never.” Bill was among the 31 students graduating.

Bill enlisted in the Air Force during the Korean War in 1951. He went to basic training in San Antonio, Texas, and after completing that, was asked what area of the Air Force he would like to pursue. “I always wanted to be an airplane mechanic,” and in the same breath he continued, “You know, don’t you, that during the 50’s there weren’t any jets yet.” A fact that I wasn’t aware of.

He went to Witchia Falls, Texas to aircraft mechanic school and then was  transferred to Mather AFB in Sacramento, Calif., where he serviced B-29 aircraft engines.

The Korean War ended while Bill was stationed in Sacramento, but prior to being discharged, he received orders to be deployed to Japan, spending seven months at Yokota Air Base.

The flight back to the United States afforded Bill the opportunity to spend a couple of hours in Guam, and an overnight stay in Honolulu.

Bill received his honorable discharge from the Air Force in 1955, and moved back to Martin to help his parents on their farm/ranch.

The Erickson property was sold in 1997. Bill and his mother moved into an apartment at the Martin Housing complex. He continued to be his mother’s caregiver until her death in 2004.

Bill has traveled to 23 states in the U.S. He has also been to Catalina Island once, along with Canada and old Mexico three times. “The best way to go is to pull a small camper trailer and stay at campgrounds. It is too expensive to stay in motels. If I were able to travel now, that is the way I would go,” Bill said.

There is an electronic keyboard sitting in Bill’s kitchen but he says after taking lessons for years from Harry Beck, he seldom plays any longer. He also took guitar lessons from Mr. Beck who was said to have been quite a talented musician. Despite playing neither of these instruments any longer, Bill spends a lot of time listening to music and, if given the chance, would very much enjoy escorting a partner across the dance floor.

Bill gets around well, still drives and is a wealth of knowledge; especially when he’s talking about subjects relating to travel. While we were talking about the places he’s traveled, I likened him to a walking road map.

“I recently read somewhere that if your last name ends in “sen,” you are more than likely of Danish ancestry but if it ends in “son,” you are of Swedish ancestry,” Bill stated.

A seven foot tall Norfolk Island Pine, Bill named “Charlie,” literally occupies one whole corner of his living room. Charlie is over 17 years old, thriving, and has become Bill’s closest companion. “I tried to give that tree away a long time ago but now I wouldn’t think of doing that because I’d miss it,” he said proudly.

I asked Bill, “What advice can you give to others?” He immediately answered, “Get out and travel a lot, enjoy the country.” According to Bill, the secret to a long life and one he practices daily is to take care of yourself and take vitamins.

If you take the time to listen, Bill always has an interesting story to tell. Mostly he really enjoys talking about the places he’s been.

Bill hands everyone he meets a business card imprinted with these words: “Yesterday is History, Tomorrow is a Mystery, Today is a Gift . . . That’s why it’s called the ‘Present!’” Words he certainly lives by.