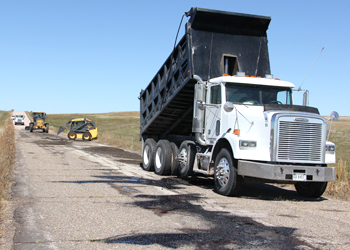 The Bennett County Highway department is making progress county-wide toward finishing up roadwork projects before winter.

The Bennett County Commissioners meeting on Wednesday, September 2, was called to order at 9:30 a.m. with Commissioners Schomp, Slattery and Fanning present.

Repairs to the surface on Old Highway 18 is near completion. Oil was spread over the bottom of the potholes, recycled millings were added and another layer of oil was spread on top. The area was then compacted to secure the fill.

Most of the mowing on the west side of the county has been completed and the department continues to spray for noxious weeds as weather permits.

Butch Ceplecha was present to express his opinion that chalk rock and limestone are one in the same thing and is accessible in Bennett County. Discussion about whether or not it is an adequate source of base material is still under deliberation.

No sealed bids were received for the bid letting on the sale of the May Pit Gravel. At this time, the county has one year to negotiate any prospective offers to purchase. Commissioner Schomp was notified by someone who would like to purchase the gravel. It was decided that the sale would be an all or nothing deal for the sale of 35,000 ton at $4.45 per ton.

Steve Hahn was present  stating that he had completed his contract obligations on County Line Road. Paperwork cannot be submitted until everything is in compliance, so the board agreed to grant Hahn a 60 day extension. The invoice from Brosz Engineering will be added to the claims for September. Once this invoice has been paid, the county can submit the paperwork for the 80/20 State reimbursement.

Kelvin McCollam reported on the results of the roof inspection he did to detect wet spots on the courthouse roof. According to McCollam, there are some areas of wet spots on the roof that need to be addressed but he feels they are minor. He still maintains that the roof is in good shape. Other than  fixing the damaged areas, he doesn’t see the need to replace the whole roof.

The only bids received to replace the roofs on the courthouse were from Pete’s Builders. The contractor has amended their bid to exclude replacing the roof over the law department’s portion of the building. Commissioner Schomp made a motion to reject all bids, Commissioner Fanning seconded and the motion carried. The issue will be an agenda item for the next meeting.

The 2021 provisional budget hearing/adoption was tabled for further consideration.

Veldon Thayer was present at the meeting to ask the board if the county would be interested in purchasing gravel–plus mining services–from his gravel pit. After some discussion was held, it was decided that the county would mine and purchase 20 loads at $3.00 a ton, try it out and then renegotiate at a later date.

The two old Vermeer mowers that the county owns were declared surplus equipment and will be placed on Purple Wave. What to do with several used culverts and a piece of office equipment will be addressed at the next meeting

Casey White Face was present to ask the board if the county would consider finishing the work they had previously started on the road going up to her personal property. It was stated that the project involved approximately 400 yards to finish up to her autogate and materials to finish it could be obtained from her property. The board agreed to completing the project.

Mike Pisha and Bert Ready were present to ask the county if they could avoid cutting into their trees that line Lacreek Loop when pulling up the sides of the road. Highway Superintendent Justin Friese said he would stay out of the trees but is doubtful if this would solve the county’s efforts to fix issues they are addressing.

Highway Superintendent Justin Friese stated that he would be losing three employees in the near future. This being the case, his request to hire Walter Martinez, Jr. and Nicholas Lessert as new full-time highway laborers was granted.

The board received a subpoena from the Martin Police Department asking permission to view footage from the county’s outdoor security cameras. Discussion was held pertaining to how to handle releasing footage when law enforcement requests it. Jeff Siscoe asked the board for the proper protocol he should follow when he gets requests to view footage from the security cameras. The board recommended waiting until all five commissioners could be present to make a recommendation. Siscoe also presented to the board his annual report and the required documents pertaining to Emergency Planning and Hazard Mitigation.

With no other items to address, the meeting was adjourned. The next scheduled meeting will be Wednesday, September 16 at 9:30 in the court room at the courthouse.