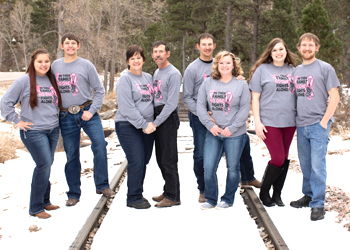 Awaiting a medical diagnosis of any kind is grueling. It can be especially grueling when you aren’t experiencing pain, don’t feel ill, don’t have any symptoms or have any family history pertaining to the diagnosis. It was solely on a whim that Martin resident, Tracie Hahn, decided it was time to get some medical tests done that she had been neglecting to do for some time.

While growing up and into adulthood, Tracie was very diligent about performing breast self-examinations on a regular basis. She admits, however, that for the past several years she neglected to schedule the recommended annual mammogram test along with other yearly examinations. Early in 2019, she decided it was time to get some tests done so in June she went to Rapid City for a mammogram. After the test, Dakota Radiology tried to contact Tracie via a letter telling her that they needed to have more pictures done, but for some reason, Tracie neglected to open the letter. Eventually the facility reached her by phone telling her she needed to come back, so she went back to Rapid City and had an ultrasound done on her right breast which revealed a spot. A biopsy was done at the same time and on October 25, 2019, she received the original notification from Dakota Radiology diagnosing her with invasive ductal carcinoma.

“Cancer is a hard word,” Tracie commented, “When I went to work the day they called me, I was upset. But I kept telling my husband, Harvey Lee, I just keep thinking in my mind they’re going to call me up and tell me that’s not mine, that it was somebody else. I lived in denial for a while, it’s very surreal.”

Invasive ductal carcinoma is the most common type of invasive breast cancer. It starts in the breast ducts, grows through the duct wall and into nearby breast tissue, and can continue to grow causing a lump or thickening in the breast. The cells can metastasize and spread to the lymph nodes and other areas of the body.

Tracie and Harvey Lee made the decision right away to go to Mayo Clinic in Rochester, Minn. “All of my kids, as well as my mom, wanted to go with us when we went out the first time,” Tracie said. While sitting in the waiting room, Tracie stated that she was surprised to see that other patients only had one or two people accompanying them. “At my first appointment, the doctor stated, “I’ve heard that you have an entire gang out in the waiting room.” Tracie indicated that she appreciated the fact that Mayo treated the family well and that everyone was allowed to be present at the doctor’s appointments.

A new MRI was done at Mayo revealing a second spot on the right breast which was located directly behind the first. The test also showed a spot on the left breast, but when an MRI was re-ordered for the left side, the spot could not be found.

The doctor told Tracie she felt that no immediate decision needed to be made but there needed to be a plan put in place. Tracie was faced with trying to decide if she wanted to have the cancerous lumps removed from her right breast, requiring removal of over half of her breast as well as having to make the required return visits to Mayo every 6 months for observation and testing. Along with that, the possibility of the cancer appearing in the left breast was an underlying concern. After conferring with her family, Tracie made the decision to have a double mastectomy along with reconstructive plastic surgery.

Tracie’s mastectomy surgery, which also prepared her for the reconstructive surgery was done in January of 2020. Once again, her whole family accompanied her to Mayo. Covid-19 hit before she could have the reconstructive surgery done which meant she was subjected to more tests to eliminate that possibility and it also limited the number of people who could accompany her.

Since Tracie’s cancer is known to be driven by estrogen, she has to take an estrogen-blocking medication for the next five to ten years but since the cancer was caught early and was small enough Tracie didn’t have to endure any chemo or radiation procedures.

Every woman’s breast cancer story is different pertaining to their own unique experience. Tracie stated that at least five of her classmates from high school either have or have had breast cancer. She considers herself blessed that she never felt sick, was diagnosed early, and didn’t have to endure going through chemo or radiation.

People kept telling Tracie she had a really good attitude about her diagnosis. “Everything went so fast. I just didn’t take time to process it all. Actually, the first time it really bothered me was a year later when I went back for the reconstructive surgery,” Tracie said.

Tracie feels fortunate to have had the loving support of her family, friends and neighbors during her battle with breast cancer. She regards her co-workers at Lacreek Electric, where she has worked for the last 12 years, as her awesome extended family. She also appreciated all the help from her neighbors who came by to feed calves, bring food and help out with whatever needed to be done. “You know, that’s the one thing I said to Harv, I don’t imagine that it would be very easy to do any of that without all of those people, they were just great!” Tracie also feels like attitude has a lot to do with trying to deal with an incurable disease. She would also like to stress that doing the preventive tests are vital, please don’t put them off!

C.H.A.R.T. (Cancer Healing Assistance Resource Team) of Bennett County was founded by Dianna Anderson in November of 2010. The purpose of the organization is to assist cancer patients who are residents of Bennett County with travel costs to treatment centers. Their funding comes from donations and fundraisers. No one-on-one counseling services are offered but they are a valuable referral resource which provides support from other cancer survivors. For the 10 years C.H.A.R.T. has been in existence, they have provided help to 212 Bennett County cancer patients in the amount of $73,074.50. Contact Dianna Anderson or Merti Whirlwind Horse for assistance or more information.

According to U.S. Breast Cancer statistics, 42,170 women are expected to die of breast cancer in 2020. One out of eight women will develop breast cancer in her lifetime. Some of the leading causes of breast cancer have been linked to aging, hormone replacement therapy, obesity, oral contraceptives, ionizing radiation exposure and genetics. Breast Cancer Awareness month is marked in countries across the world every October. It’s purpose is to help increase attention and support for the awareness, early detection and treatment as well as palliative care of this disease. Although there still is no medical cure for breast cancer, there is support, hope and the greatest of all, love.