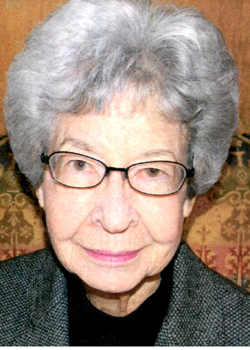 Vivianne A. Price was born February 24, 1923, in Ansley, Neb. to Alex Olson and Peggy (Nelson) Olson. After graduation from Bennett County High School in Martin, Viv moved to Pierre, where she worked in state government as a secretary.

In 1946, she married Fred Price. The Prices moved to Chadron in 1953 and to Rapid City in 1955. Viv spent ten years in Rapid City working at the Rapid City National Bank. In 1964, she and her husband moved to Sioux Falls, where Viv worked as a secretary at the Home Federal Savings Bank until her retirement in 1985.

Viv was a member of the First Congregational Church of Sioux Falls and enjoyed many years volunteering at Sanford Medical Center. She was an avid golfer at Westward Ho Country Club well into her 90s.

Viv was preceded in death by her parents; husband; sister Ruth Audiss, sister Margaret Moore; and brother Vic Olson. She is survived by nine nieces and nephews.

There will be a family burial service at Riverside Cemetery in Pierre, S.D. Online condolences may be left at www.millerfh.com