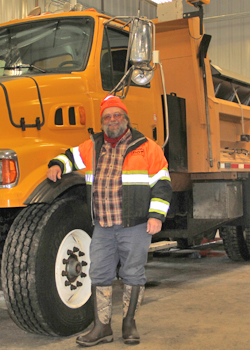 If a person was looking for a sign that they made the right decision, former South Dakota Highway lead maintenance worker Loren Haynes had one delivered to him in the form of snow and a winter weather alert, the day after he retired.

Haynes’ last day on the job of working for the South Dakota Dept. of Transportation highway dept. was last Friday, Oct. 23, and then the snow came, 5-7 inches of it, on the highway he had helped maintain for the past 25 plus years.

While the crews were out pushing the snow off the area highways, Loren was finally able to kick back with a hot cup of coffee in his hand and look out the window and watch it snow, and know he didn’t have to be in the middle of it.

“At this time of year, it is a stressful job,” said Haynes. When the conditions are bad, we would hope and pray that when we turn around, nobody is coming. That’s why when we advise no travel, please listen and give the plows a break. There was at least three times I was saying prayers, wondering if I’d make it back home.”

Haynes said some of the worst storms to hit the area were the blizzard of 1996, the Atlas storm in October of 2013 and the 2018 blizzard.

“We were sent up to McIntosh and Mobridge for the blizzard of 1996 to help open up the hay yards for ranchers,” said Haynes. “During the Atlas storm, we were in Spearfish for our daughter Lorena’s wedding, and it got cancelled, so I worked at the Spearfish shop for four days. The recent 2018 storm was one of the worst storms we have had here.”

“We lost a lot of our equipment during the blizzard of 1996 and had to get help from Nebraska,” said Haynes. “Our equipment was not in very good condition and after that, we updated our equipment.”

“The new shop was one of the highlights of my career,” stated Haynes. “With our equipment getting bigger and not fitting in the old building, we needed it. It made it easier to work on equipment and we had less breakdowns because we could put the equipment inside and we would have less ice on the lines and other places. It was a nice, great improvement.”

“This job has been good to me,” suggested Haynes. “It’s like a second family. I have met a lot of nice people and have really enjoyed serving the public. It has been stressful at times and there’s times I couldn’t sleep, but it was a career choice for me and I’ve tried to give it 100 percent. Whether there is two inches or two feet of snow, you have to take care of it the same.”

“I like to remind the new guys that everyone who drives by you on the highway is your boss, they pay the taxes,” said Haynes.

Loren started out working for Larry O’Bryan when he was in high school. He then worked for K&M Jack and Jill for 13 years, then three years for Bob’s Gas before applying for and receiving the job of highway maintenance worker for the SDDOT.

Scott Robinson was the manager at the time and later on Frank Mills from Murdo took over. When Frank left, Loren was offered the foreman job which was later called, Lead Hwy Maintenance Worker.

With Loren’s retirement, Cody Allen is now taking over his position.

“It always made me feel good when the public thanked us,” remarked Haynes. “We got some complaints too, but the thank you’s made us feel  pretty good.

Now that he is moving down a different road, he said he will be looking forward to fishing, hunting and family time.

Loren and his wife, Anna, have 12 grandchildren and he plans to spend more time with them.

Haynes said he has passed on his advice to the new workers coming in, such as, step up and ask questions of other more experienced workers and embrace change.

“I tell them, remember, change usually ends up a good thing, don’t fight it, it usually works out for the best. I am thankful to all those who helped me change,” added Haynes. “I accept this change with open arms and now I hope to be changing a lot of fishing lures.”