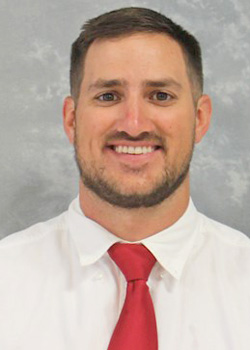 Sasse is a former Chadron State football player and has been an assistant coach at the college the past two years.

“I’ve known Clint going back to 2003,” Long said. “To be able to hire him as the defensive coordinator now is incredible. He’s done a great job with our defense, stepping up and installing a new scheme on the fly this fall. I’m very excited to continue to work with him.”

Sasse filled in as the CSC coordinator this fall following the resignation of Craig Jersild.

Sasse was an all-state running back as a senior at Bennett County High School in 2008, when he rushed for 1,245 yards and 15 touchdowns and caught 15 passes for 160 yards and two more TDs. In addition, he completed seven passes for 278 yards and four touchdowns.

After redshirting as a freshman at Chadron State in 2009, Sasse earned four letters as a safety and special teams player for the Eagles. Although he missed much of his senior season because of an injury, he played in 37 games and finished his career with 45 unassisted and 74 assisted tackles.

At the end of his senior season, Long invited Sasse to remain at CSC and help coach as a graduate assistant. He did that for two years, then joined former CSC teammates Jake Iodence and Patrick O’Boyle to head the football coaching staff at Lee Williams High in Kingman, Ariz. He was the defensive coordinator one year and the head coach two years.

Sasse returned to Chadron State as the special teams and linebacker coach in 2019.

His new position will be a challenge, Sasse noted.

“The offenses nowadays use every running and passing play, formation and motion in the books,” he explained. “Rather than trying to make it complicated and having a call for everything they do, we try to keep it simple and focus on playing fast and physical. It comes down to playing hard, beating blockers, tackling well and covering receivers. The basics.”

Sasse is married to the former Kelsy Wood of Hemingford, where she was an outstanding all-around athlete and then excelled as a hurdler, relay runner and multi-events participant at CSC. They have one son, Kal, who is six months old.

Clint’s parents, Kevin and Joni, live on the family ranch west of Martin.