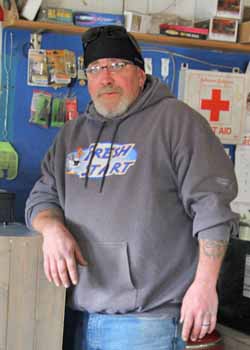 Tony Powell, Manager of the Yesway Garage in Martin, received some devastating news at 5:00 p.m. on Monday, November 30. Unbeknownst to him, Yesway Corp. had decided to shut down the garage effective December 12, potentially leaving himself and two other employees out of a job and Martin losing a viable business. Yesway sited the reason for the closure was so they could concentrate exclusively on being a convenience store.

Powell started working at the garage when the convenience store was owned by Fresh Start and then continued working there when Yesway took over ownership. He has worked at the garage for seven years.

Not only was this news devastating for Powell, but residents in Martin and the surrounding area immediately felt the potential loss. Over the years, many people have found the garage to be a valuable outlet for providing tire purchases and repairs as well as a source for getting mechanical work done.

Once the news spread, residents began to rally, putting forth a joint effort to help do all they could to keep the garage open. Telephone calls were made to Yesway Corp., emails were sent, posts were put on Facebook and many people took time to stop by the garage to offer their support.

“What I don’t think Yesway realizes is, once people stop at the garage, they automatically go into the convenience store and purchase items,” said Dale McDonnell.

Powell stated after giving it considerable thought, he came to the realization that Martin is home and he would like to continue providing the community with the same great services he has in the past. Given a short two-week time line, Powell has had to scramble to put it all together but he has leased the garage from Yesway and recently reopened as Martin Tire and Repair. Powell said he plans to give the community the same hours, same business, and provide the same services.