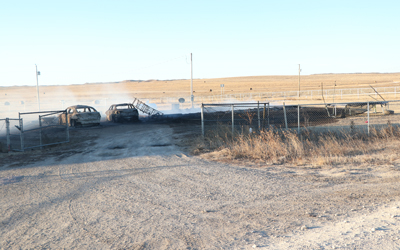 At 1:25 a.m. last Wednesday morning January 20, 2021, the Martin Volunteer Fire Department responded to a structure fire at the Alicia Little Hawk residence four miles south of Martin–20901 296th Street. Fire Chief Chris O’Bryan stated within 12 minutes of the page, he arrived at the scene to find the home fully engulfed in flames. Three MVFD fire trucks and one rescue truck arrived shortly thereafter and extinguished the remaining fire which resulted in a total loss.

Alicia Little Hawk said between 9:00-9:30 p.m. she sent her three children, Daniel age 12, Danica age 10 and T’yanna age 7 to bed and laid down on the couch in the living room which is something she rarely does. Her boyfriend, Daniel Lone Elk was asleep in the bedroom. At midnight, unable to sleep, she heard noises which she thought was just the refrigerator shutting off and on. Disregarding the noises and still not being able to sleep, she then heard louder noises sounding similar to hail hitting the roof. A series of boom and pauses eventually prompted Alicia to check out what was going on.

“I walked into the kitchen and noticed a glow through the window so I went to the back door and saw black smoke pouring into the room. Fortunately I didn’t open the door,” Alicia said. Alicia immediately went to wake up her children and boyfriend. Exiting the house, she noticed her car was already engulfed in flames but her efforts to try and save it by trying to hook up the garden hose proved fruitless.

Knowing the children were safe, Daniel and Alicia attempted to go back into the house to retrieve some personal possessions. They both suffered from smoke inhalation and were taken to Bennett County Hospital where they were administered oxygen therapy.

The cause of the fire, costing the family total loss of their home, two vehicles and a shed remains under investigation.

According to O’Bryan, modern homes being constructed using materials such as styrofoam and vinyl siding tend to ignite faster, burn hotter and give off a higher level of toxic smoke.

If you have items you’d like to donate to the family, they can be dropped off at the April Byerley residence at 21899 296th Street. A GoFundMe account has also been established.