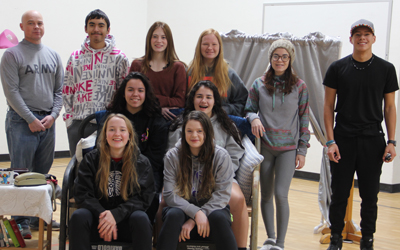 The play centered around an event-filled evening one sister has while covering a babysitting job for her sister, Jane, (played by Baily May).The evening quickly goes wrong when Diane (played by Tegyn Kolb) is visited by her father’s new girlfriend (played by Paige Turpin) and her nearly blind aunt (played by Sophia May) when a possible homicide occurs. It is just a normal, horrible day of babysitting.

Gary Alexander, Bennett County High School ELA Instructor said this year’s practice sessions were held before school from 7-8 a.m. Alexander stated that despite the limited rehearsal times, the cast and crew worked very hard to pull it all together. “I think they will do great,” he commented.

COVID presented some challenges pertaining to the location of the competition. Middle School Principal, Jon Pierson and Middle School Secretary, Kelli Ceplecha worked a great deal to find a new venue when the competition got switched from T.F. Riggs in Pierre to Winner. Trying to find people that were willing to judge was yet another challenge that had to be worked out.

The competition was limited to family members who could watch only Bennett County’s performance which was held at 9:00 a.m. CST on Tuesday.