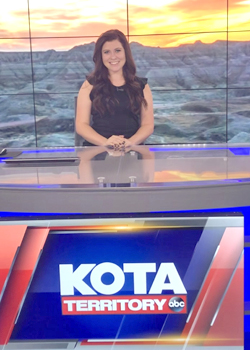 Growing up in a small town on the prairie of South Dakota doesn’t mean you can’t go on to be whatever and whomever you want to be.

“I am a multimedia journalist so I pretty much do a little bit of everything,” said Miranda about her job. “I shoot, I interview, I edit, I come up with story pitches all on my own. I do probably two stories a day and sometimes I fill in and produce and I fill in and anchor. I work the day shift, which is usually 9-5 or 9-6, each day is a little different. I come in, pitch the story ideas, set the interviews up, hopefully be editing by 2 or 3, get it in for the 5:30 show. Most of our stories go on both stations so we will write them a little differently if we can.”

When asked what she missed about Martin, she replied, “In Martin I knew everybody and it felt like everybody is family and that’s home. Coming to Rapid City, and living in east river for school, it was different not knowing everybody, but now that I’m here in Rapid and the more people I meet every day, the more connections I see that there are to home. I miss having my family right there, but I also get to hear stories about my family and get to meet people who know them and I think that is really unique and a cool thing.”

Miranda was asked what advice she would have for Bennett County High School students looking ahead in their future, and she responded, “I would say, to be open. When I applied to colleges when I was a senior in high school, I wanted to be a doctor, an OB/GYN and I really thought that’s what I wanted to do. Journalism was never something I considered because I didn’t think it would be for me. When I got to college, I realized there’s a lot more out there than just the basic things you think of, so I think the best thing they can do is just be open and be open to experiences. You might be set on being a doctor, and that might work out, but you might be set on being a doctor and then realize you might actually be a really good lawyer or a really good teacher. There are so many options and I would hate for somebody to miss out on something because they think they need to be on a certain path.”

Miranda says she has been inspired by her parents, Chris and Michaela O’Bryan, raising her and her brothers and still pushing through and having really great careers.

“Besides my parents, I have met a lot of people on my job who have inspired me as well,” added Miranda. “When I interned a couple of summers ago at KOTA Territory News, a friend there, Kayleigh Schmidt, was one of the reasons that solidified my love for broadcasting. I got to see what she did every day and I got to learn the stories she was able to tell and I loved that she didn’t just tell hard news stories, she was telling the fun things.”

“I’ve been able to cover a wedding for a woman who had terminal brain cancer, and I’ve also been able to do stories about racial tension and homelessness, and I don’t think I would have thought that I could do all of those things without seeing her and seeing what she did every day of her job,” suggested O’Bryan.

When asked about her hobbies, she said people don’t realize how time consuming journalism is.

“Even when you’re not on the clock, you’re always thinking about it, keeping your eye on other stations and other stories and what’s happening in the world, but when I do get to shut my brain off from that for a few minutes, I love baking,” answered O’Bryan. “That’s one of my favorite things to do. I also love to go out and hike some of the areas,” she remarked. “The Black Hills are so pretty. I also love to sing in my car.”

“I’m heavily involved in the Miss South Dakota organization, so lately that has been the biggest thing I’ve done outside of work, focus on that,” said Miranda.

“Currently I hold the local title of “Miss Rolling Plains,” said Miranda. “I won that almost two years ago in Sioux Falls. Since then I have been preparing for Miss South Dakota and part of our preparation is not only getting ready for that competition, but it is also doing things in our community.”

“One of the biggest things I work on besides telling people about the Miss South Dakota Organization, is Page Turners, Fall in Love with Reading, my social impact initiative,” continued Miranda. “It’s all about making sure people find a passion for reading in their everyday life. My mom and my Grandma Faye (Harris) are part of the reason I decided to go with that because they’re the ones who helped me find my passion for it.”

Miranda will be competing in the Miss South Dakota pageant this summer in Brookings against 17 other contestants. She said the date is not set in stone yet because of the pandemic, but the first week in June is the tentative date. If she wins the title, she will need to spend a year dedicating life to being Miss South Dakota and serving South Dakota.

“I also work for the Rapid City Rush, the local hockey team,” she said. “I am their in-game host, doing all of their promotions during timeouts and intermissions. I’m the person who grabs people out of the crowd and makes them play games and answer trivia.”

She graduated from Bennett County High School in 2016, and from South Dakota State University (SDSU) in 2020 with a Bachelor of Arts degree in journalism and history.

The summer between her sophomore and junior years of college, Miranda interned with and had a part-time reporter job for KOTA Territory News and KEVN Black Hills Fox. She was hired full time in June of 2020 by them.

At SDSU, Miranda anchored, wrote and produced for Jacks News and produced and directed a documentary, Day in the Life: Freeman, S.D., highlighting the day to day life of a small town here in South Dakota.

For the documentary, she was nominated for the Upper Midwest Emmy Student Production Award.

She was determined to have one of her shows be shot completely through and not have to do it over again, run perfectly and smoothly. She shot it and made it happen. Her professor nominated her for the award, which she did not win but said it was really cool to feel that she knew what she was doing and that’s what she wanted to do, and someone else saw that as well.

When asked why she chose broadcast journalism, she replied, “I liked print and broadcast journalism, but there was something about broadcast...I like the more visual storytelling, and that has been a big thing for me. I really like to get the detail and some of those really up close shots so that a person can really see what a person’s story is about as well as hear it.”

She says journalist is the perfect job for her because she gets to try something new everyday; one day she gets to see the life of others, such as a doctor or a rancher, or others, experiencing their life during the time that she is interviewing them, and then she gets to share their story with the world.

When asked about a favorite story she has covered at her job, she quickly responded, the story about a person formerly from Martin, Jean Livermont, and her 100th birthday celebration in Rapid City.

“When I first found out about the birthday event, I reached out to do a story and didn’t realize there was that connection to home in there,” remarked O’Bryan. “That was a real cool story to do because it was pandemic related, which so many of my stories have been, but it was a bright, fun story to do. I had a lot of people from Martin that said, that is so cool that you were able to do that story in Rapid and we were all kind of connected to it.”

“Sometimes I think people feel that because they are from a small town that you can only do certain things, but you can do whatever you want,” suggested O’Bryan. “I graduated from a small school (Bennett County High School) with 23 people in my graduating class in a town of a thousand people. Martin gave me so many opportunities. I got to be the student council president, but I also got to be in the play. I got to do so many things and I think that having all those opportunities and experiences gave me the opportunity to really find who I was and find where I wanted to be in life. If anybody feels Martin is not enough for them, that would make me sad. Martin made me who I am and I am thankful for that, and I think everybody should be.”

If anyone wants to see stories by Miranda, you can go to kotatv.com and go to the search area and type in miranda and it should bring up her stories.