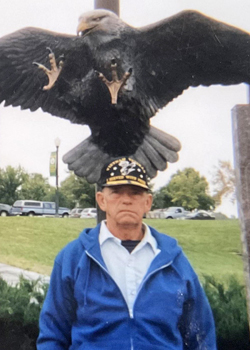 Roland “Rollie” Heinert was born December 22, 1946 in Fort Collins, Colo. His family resided there until 1951 when they moved south of Mission, S.D. and farmed. Then in 1961, the Heinert family moved into Mission. Rollie graduated from Mission High School in 1964 and continued to work in the Mission area. He helped build the current high school.

On February 22, 1966, Rollie enlisted in the Army and began basic training at Fort Leonard Wood, Mo. He also completed AIT vehicle mechanic school. Shortly after, he went to Fort Sill, Okla. and became a tank mechanic.

Wanting a change of pace, Rollie took a plane to Munich, Germany where he was stationed for 6 months. During his stay in Germany, Rollie was not a big fan of Germany.

He then put in a transfer to Vietnam in 1967 with the Mechanics 519th Military Intelligence Motor Pool division. He was stationed on the outskirts of Saigon and returned to the United States on June 2, 1968. He finished his 3 year term with the Army in Fort Hood, Texas as an APC instructor.

Rollie was awarded the Purple Heart, National Defense Medal with 2 Bronze stars, the Republic of Vietnam Campaign Medal, and sharpshooter medal. Rollie was shot 2 days before he was supposed to come home and was awarded the purple heart.

He returned to South Dakota in 1969 and worked on ranches south of Valentine, Neb. and Merriman, Neb. In 1974, Rollie moved to Arizona to work on jewelry, mainly silver and turquoise. Then moved back to South Dakota in 1977 and continued to ranch. He was hired at Lacreek Electric in 1978 and remained with them for 34 years, retiring in 2012.

Today you can find Rollie still active in Martin, hunting, fishing, and building coat and hat racks. Rollie and Darlene are wonderful people. Interviewing Rollie and chatting with Darlene was an entertaining and pleasant experience.

We would like to continue to honor our area veterans. If you know someone who would like to tell their story, contact the Bennett County Booster at 605-685-6866.