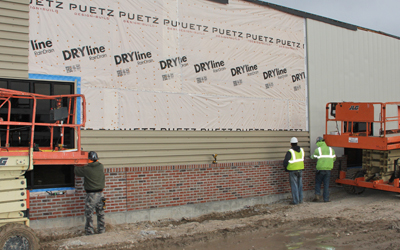 It doesn’t seem possible that a whole year has elapsed since the Bennett County School Board unanimously voted in favor of the $13.1 million dollar addition onto the high school, but that is just the case.

At a special board meeting held on March 23, 2020, the bid from Puetz Design + Build was voted on and accepted.

Ironically, on the opposite end of the spectrum, the pandemic had just begun to kick into high gear. Covid-19 brought a whole new meaning to in-person classroom instruction, protocols and directives from the CDC.

Despite all the adversities the pandemic brought with it, Puetz Design was able to set their start date as April 27, 2020, three weeks ahead of schedule. By April 22, the building site had been staked out, with equipment and gravel being moved on-site. A chain-link fence was built to enclose the area, and then the ground-breaking began.

According to Jed Liedtke, Puetz Design has been able to remain on schedule despite the pandemic but has made a few adjustments to their material order quantities to avoid delays on the receiving end.

Liedtke stated the completion date is set for August but Puetz is attempting to finish up prior to the deadline.