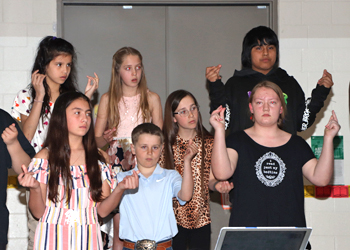 The concert began as the Fifth Grade Band performed: Skip to My Lou an American Folk Song; Oh, Susanna by Stephen Collins Foster; and Two by Two a traditional piece.

The Sixth and Seventh Grade Band then performed four pieces: When the Saints Go Marching In arranged by John Higgins; Old MacDonald Had a Band a traditional piece; Frere Jacques (round) a French Folk Song; and Rio Bravo arranged by Bruce Pearson and Barrie Gott.

The Fourth Graders played their recorders displaying several pieces they have learned this past school year.

Fifth Graders then performed starting off with Follow the Drinkin’ Gourd A song of the Underground Railroad; Green Sally Up (round) a traditional piece; In the Hall of the Mountain King from “Peer Gynt” by Edvard Grieg; I Love the Mountains/City Life by John Jacobson. The final piece performed for the evening was done using body percussion, Sevens to the music of Happy by Pharrell Williams.