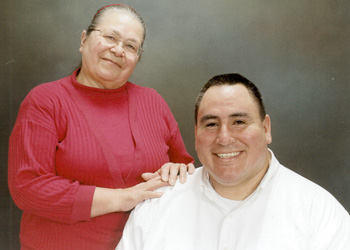 Terrance was born at the Pine Ridge I.H.S. Hospital and was listed as Baby Boy LaMont/Reginald Eugene. Ione was a young lady when Terrance was born and announced after his birth she was going to adopt him out. During the adoption, Terrance received his legal name of Terrance Shane Fish and he became the son of Mike and Vivian that day.

The family moved several times in his early years, including Shadbolt Ranch in Merriman, Neb., Rushville/Hay Springs area, Minatare, Harrison, and the Churn Ranch South of Merriman. Terrance enrolled in the Merriman Elementary School, but several weeks later found out the family was not living in that school district which made the family decide to relocate once again, this time to Scott City, Kan. Shane finished kindergarten in Kansas then enrolled at Shallow Water the next fall for first grade. After the passing of his father, Terrance and his mother relocated back to Merriman to be closer to family. Terrance finished his elementary and high school years in Nebraska. Terrance earned money by mowing lawns and removing snow. He was very generous to his family, by purchasing bikes for himself and his brother. Terrance worked as a ranch hand when he turned 14 and earned enough money to purchase his own vehicle during high school.

Prior to enlisting in the Army, Terrance found out there was a child in his future with Loretta Nelson; which made his decision to enlist in the US Army in 1983 which he thought he would be able to provide better for his family. Their son was born on March 17, 1983, Travis Shane Fish. Terrance helped establish a home for his family before he was deployed overseas to Germany for a two year stay where he established mobile communications for the bases. Shane’s second tour was also in Germany where he was stationed once again for two years. During his time there, he met a woman by the name of Patricia Keepers, who accompanied him back stateside. They were married on August 2, 1989 and made their home in Virginia. Terrance lived in Virginia until he was deployed to Saudi Arabia at the onset of Desert Storm. Terrance was honorably discharged after his tour in Saudi Arabia to stay home with his family after serving nine years. Terrance moved to Orlando, Fla. where he and Patti were both employed and after several years they separated. Terrance once again remarried to Dawn Lee on August 1, 1993 and to this union Michael Austin, Shelby May, and Jackson James were born.

Graveside services will be held at 10:00 a.m., Saturday, August 22, at the Merriman City Cemetery in Merriman, with Mr. Brett Burress officiating.