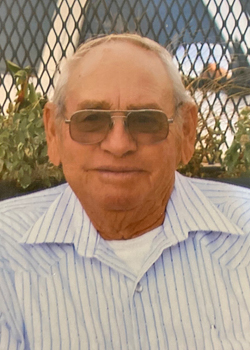 George was born in Bassett, Neb., October 4, 1930 to Floyd and Grace (Duggar) Farley. George attended grade school in Rock County and lived and helped his grandparents on their farm part-time. His family moved to Valentine, Neb. where he started high school and then moved to Martin, S.D. and graduated from Bennett County High School in 1949. He worked at the Trucking Company and Bennett County Coop part-time while attending high school.

George married Elsie Jackson on August 20, 1950. They recently celebrated their 70th Wedding Anniversary this year. He worked at Bennett County Coop for one year and then they moved to the old Hoffman Ranch north of Cody, Neb. where they spent six years. During this time, they welcomed daughter Karen and son James. They then moved to Harrington Vetal area where they resided for nine years. They welcomed their youngest son Ron. George was a member of the Vetal Fire Department and School Board Member for Vetal and Tuthill Elementary Schools.

In 1968 the family purchased the old Stoner farm. Together they all shared and worked ranch life. George was completely content and devoted in his endeavor to teach and grow his children. He installed a hard work ethic in his children and grandchildren, and they all share fond memories of working on the ranch, milking cows, feeding bucket calves, and working in the hayfield. Despite the early hours, hard workdays, and long cattle drives, George always stopped for coffee every morning and every afternoon. His family gathered around the kitchen table sharing conversations, coffee, cookies, and lifetime memories.

George continued working on the ranch and windrowing hay until April 2015 when he suffered a stroke. He spent five years in the Bennett County Nursing Home where he passed away September 26, 2020.

George was preceded in death by his son Ron Farley, parents Floyd and Grace, sisters, Bernice Schaefer and Phyllis Ward and brother Alan Farley and nephews Brent and Brad Farley.