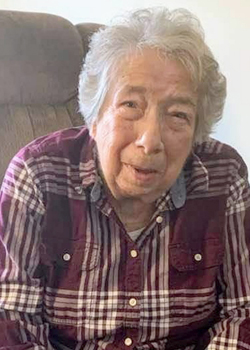 On August 22, 1951, Jessie married the love of her life, Thomas Jackson (Jack) Coon in Enid, Okla. The two lived in various cities prior to settling in Martin, S.D. where they raised their four sons, Mark, Randy, Paul, and Terry. Jessie was a wonderful mother, grandmother, and homemaker. She worked at the Bennett County Nursing Home for 24 years and so enjoyed the residents there. Jessie loved to go fishing, camping and a variety of other outings with her family.

She is preceded in death by the love of her life, her husband, Thomas Jackson Coon; her mother, Alpha Roberts Owens; her father, Manning Owens; her sisters, Laura Jane Moore and Mary Joyce Kelsey.

Visitation will be held from 6 p.m. to 8 p.m. on Friday, October 23, at the Bennett County Funeral Service at 211 Main Street, Martin, S.D. Graveside funeral service and interment will be held at 11:00 a.m. on Saturday, October 24, at the Martin Community Cemetery. The family requires all in attendance to wear a face mask, as there are members who are immunocompromised.

In lieu of flowers, the family requests memorials to the Bennett County Nursing Home and donations may be sent in care of Bennett County Funeral Service, PO Box 65, Martin, S.D. 57551.