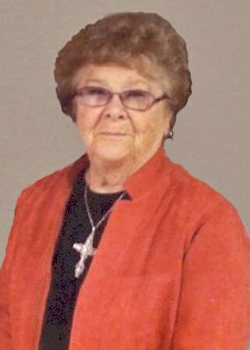 Shirley Porch was born on December 5, 1937, in Genoa, Colo. to Lamoine “Lee” and Waneta Ruby (Westfall) Holcomb. In 1947, when she was in the 4th grade, they moved to South Dakota to a place west of Kadoka in the Cactus Flat area. She graduated from Kadoka High School in 1955.

Shirley worked at Cactus Flats for Leonard Emery through high school and then worked for the States Attorney, Harold Gilcrist, for two years.

Shirley married her high school sweetheart, Stanley Porch, on December 13, 1958 in Spearfish. To this union three children were born: Kristi Kay in 1959, Kari Renee’ in 1961, and Matthew Todd in 1964.

Shirley was a member of the Wanblee Ladies Birthday Club, Bible Study, and Presbyterian Church of Kadoka. She took meticulous care of her home, lawn, and garden. Her home sparkled and her lawn was dandelion free.

Shirley never missed an event for any grandchild or great-grandchild. She was there for every sporting event and music program. Her home was always meant to feel like “your” home. She would invite everyone for a cup of coffee, stay to eat, or spend the night. Shirley always had plenty of food for everyone. She was known far and wide for her years of “Harvest Field Feasts” and Christmas tree hunting parties.

For many years Shirley and Stanley would spend their winter months in Mission, Texas. They enjoyed their time in Texas and made many lifelong friends.

She was preceded in death by her parents; her daughter, Kristi Thompson on March 8, 2002; brother-in-laws, Boyd Porch, Bob Toliver and Steve Jeffords; sister-in-law Carol Jeffords; and her parents-in-law.

A visitation was held from 4-6 p.m. on Tuesday, October 27 at the Kadoka Presbyterian Church with a prayer service at 6 p.m.

Funeral services will be held at 10:00 a.m. on Wednesday, October 28 at the Kadoka City Auditorium with Pastor Jesse Taylor officiating.

Interment followed at the Kadoka Cemetery.

Memorials may be directed to the Kadoka Ambulance Service or the Kadoka Fire Department.

Arrangements are with Rush Funeral Home of Kadoka.