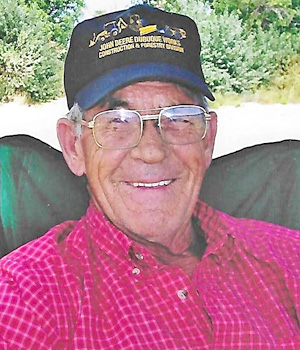 He was born to parents James Eli Thayer and Maude Mae Swick, on August 19, 1942, in Newport, Neb., the fifth of six children.

Lester married Verla Clausen on April 17, 1961, in Rushville, Neb. To this union six children were born: Verlene, Verna, LeAnn, Leslie, Cassie, and Malena. For the majority of their marriage they lived in Merriman where Lester worked for the Cherry County Road Department before retiring early to take care of his wife when she became ill. After the passing of his wife, he spent his time traveling to spend time with his children and grandchildren, always making sure to not miss a birthday or anniversary. If not attending grandchildren’s events, he could be found playing cards or games with his sisters and their spouses.

He was preceded in death by his wife Verla, infant daughter Verna, parents Jim and Maude and two brothers Fred and LaVerne.

Visitation will be from 5 p.m. to 7 p.m. November 15, 2020, at the Chamberlain-Pier Funeral Home in Gordon. Services will be at 10 a.m. Monday, November 16, at the Merriman Dance Hall with Brett Burress officiating. Burial will follow at the Merriman Cemetery.

A memorial has been established and donations may be sent in care of Chamberlain-Pier Funeral Home, PO Box 366, Gordon, NE 69343.