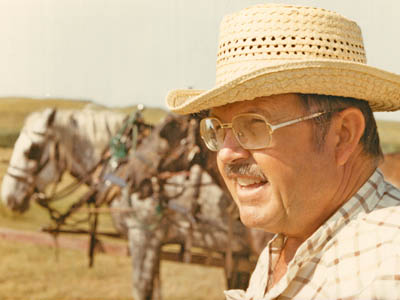 A lover of life, family, friends, horses, and always a kind word, William C. “Bill” Arnot passed away after 94 wonderful years on November 16, 2020, in Rapid City, S.D. This True Gentleman was born October 3, 1926 to parents Howard and Emma Betlach Arnot, in beautiful Moab, Utah where the family was operating a sheep ranch. This talented and patient man was born an only child who enjoyed the natural wonders of Moab, raising sheep, fishing, and playing among the grapes in the vineyards.

By 1929, Howard decided to return to the Sandhills and the Shadbolt-Arnot Cattle Company was formed south of Merriman, Neb. in 1930. In 1939 they purchased the Tom Coffey ranch west of Merriman. This became the Half Diamond Lazy U Ranch where lifelong friendships were formed with neighboring ranching families.

Bill remembered fondly of riding horseback along with the teacher daily to country school. Because of an extended trip back to Moab, his freshman year of high school was spent via a correspondence course through the University of Nebraska. He attended the remainder of high school at Gordon, Nebraska High School. An excellent student, Bill enjoyed his studies, playing football, and acting in school plays.

In 1944, Bill applied for the Army Specialized Training Reserve Program and after a long delay was drafted for infantry training in August 1945. Bill served at infantry training camps in Texas, Virginia and New Jersey. In February 1946, Bill’s army service took him to France and Germany. World War II was over by this time and his Signal Service Battalion’s main goal was repair and providing supplies. The first sergeant noticed Bill could type, so was assigned many clerical projects as well. Bill was awarded the Swiss-Rome tour for his time served in Europe, and completed his service as Private First Class and Technician 5th Grade.

A quick return to the ranch by the end of 1946 and then began college classes at Babson College outside of Boston, Mass. in September 1947. Bill completed his Bachelor of Science degree in Business Administration by 1950. He was placed on the Dean’s List and became the editor of the campus newspaper by his senior year.

Bill returned to the ranch soon after and quickly discovered his mother was diagnosed with breast cancer. She passed away in 1953, followed by his father in 1962. Bill chose to use his business degree by taking over the cattle ranch, a business and life he loved very much. Several lifetime friendships blossomed at this time: Jim Protzman, a Babson graduate, became a regular duck hunting companion; Dave Wyatt grew into a good fishing friend; Lowell Beerman who encouraged him to buy a second ranch/farm near Homer, Neb. which he owned into the 1980s; and Fay Fuscher whom he partnered with in purchasing a mountain condominium in Dillon, Colo.

The condominium became one of his best purchases as it was here he met his German-born wife Rosemarie in 1967 at an informal gathering. Rosemarie didn’t really want to attend that particular evening, but her prodding daughter Ingrid talked her into going. As the rest of the story goes, Bill and Rosemarie were married on December 1, 1967. The mother and 12 year old daughter quickly moved from urban Denver to rural ranch life in Nebraska.

At age 43, Bill’s first and only child was born, Thomas, on May 28, 1970. They rejoiced in 1974 when Ingrid (Albrecht) married John Fairhead and moved to his family ranch north of Merriman. Thomas attended the same country school as Ingrid and graduated from Gordon High School, as did his father many years earlier. Bill continued to manage and love ranch life in all its seasons. Horseback riding, hunting geese and ducks on the ranch’s lakes, and raising black Angus cattle all created lifelong memories. From 1964-1976 Bill served on the Selective Service Board in Valentine, Neb. This board decided whether a man should serve in the military or could be excused. In the 1980s, Bill served on the school board for Gordon High School and zone manager for the Lutheran Church Extension Fund.

In 1998, Bill and Rosemarie sold the ranch and retired in the Black Hills near Rapid City, S.D. in 1999. The happy couple greatly enjoyed their silver years in the Black Hills while keeping several horses on the property. They became greatly involved in their church communities. Bill worked part-time as an elementary school tutor, store assistant at Prairie Edge Gallery, and shotgun instructor at a Boy Scout camp near Custer, S.D.

Declining health in later years challenged his style somewhat, but never his loving, outgoing, and patient nature. Bill passed away November 16, 2020 at the Hospice House, Rapid City, S.D. He was preceded in death by his parents and wife Rosemarie, who passed away on April 9, 2016. He is survived by son Thomas Arnot of Denver, Colo., stepdaughter Ingrid (John) Fairhead of Merriman, Neb., four Fairhead grandsons and families, including eight great-grandchildren.

A memorial service will be held at a later date in 2021 at the First Assembly of God Church, Rapid City with a grave side service in Merriman, Neb. The family suggests any memorials be made to the American Cancer Society. www.cancer.org