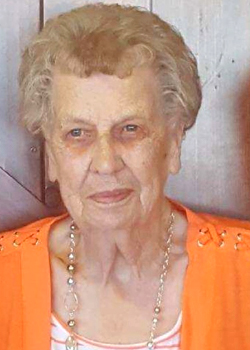 Helen M. Good was born June 16, 1930 in Martin, S.D. to Richard H. and Helen I. (Carpenter) Weaver. She grew up in the Long Valley community and attended rural school for eight years.

Helen was united in marriage to Lorin Good on June 17, 1947 in Rapid City, S.D. They made their home south of Wanblee, S.D. until they retired and moved to Martin in November of 1988. After Lorin’s death in September of 1989, she moved to Kadoka in 1990 to be closer to family. Helen always had a garden and enjoyed cooking and baking.

Helen was a 56-year member of the American Legion Post #240 Auxiliary of Martin. The last three years of her life Helen was living in an assisted living center in Spearfish.

Helen was preceded in death by her husband Lorin; one son Jerry Good; her parents; and five brothers.