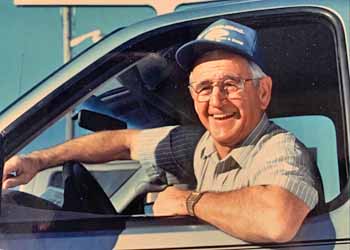 Richard was born on a farm in Lynn Grove, Iowa, on February 4, 1936. His family later moved to Superior, Iowa, where he went to school and worked on the family farm. Richard was Valedictorian of his 1954 class. Shortly after, he married his high school sweetheart, Lois on December 16, 1956, celebrating their 64th wedding anniversary last month. They went on to have three children: Steve, Shelly, and Scott.

Richard started his automotive career as a field representative for GMAC in Neb. In 1967, Richard and Lois moved to Martin, S.D., where he established Bair Ford. Within this 50-year business venture, Bair Ford was a staple in the Bennett County community!

He took great pride in dedicating 50 years of service on the Franchise Automobile Dealers Association of South Dakota also known as (SDADA), and the Board of Directors of the Rocky Mountain Ford Dealers Advertising Fund (RMFDAF). Wanting to continue serving the community from the healthcare standpoint, Richard was on the Bennett County Hospital Advisory Board starting in 1987, and the Board of Directors for Horizon Health. Dick was a Mason for 50 years, in addition to being Master of his Masonic Lodge and a District Manager for the Grand Lodge of South Dakota. Lastly, he was praised on the Deacons Board at the Presbyterian Church, where he and Lois have been members for over 50 years.

Grandpa Bair’s lifelong hobbies were playing golf, and he served on the Bennett County Golf Association for over 50 years. He was also a regular member of Warrior Football, dedicating more than half a century to the “Chain Gang” where he stood along one of his best friends, Bob Claussen. His most cherished moments were those that were spent with his family. From Spirit Lake, Iowa, to local sporting events, the best memories reside in the comfort of his own home.

Funeral Services will be held at the Old American Legion, starting at 11:00 a.m. on Saturday, January 9, 2021. A luncheon will follow at the New American Legion.