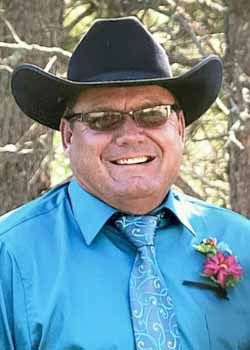 Kyle was born on December 25, 1959 to Robert and Faye (Porch) Harris in Martin. In August of 1960 the family moved to Chadron. Then in the fall of 1962 they moved to Arthur, Neb., from there they moved to Big Springs. Kyle attended school in Big Springs until his Junior year, then they moved back to Martin. He was involved in basketball and rodeo. He graduated in 1978 and then attended college in Okmulgee, Okla., where he learned the trade of saddle making and boot repair.

He returned to Martin and opened his boot and saddle repair shop in Circle H on Main Street where he worked until 1996.

Throughout his life he also farmed and ranched alongside his father-in-law Edward Henschel and later his sons.

Kyle’s greatest achievements were his children and grandchildren. He was a loving son, husband, uncle, father, and papa; a genuine friend to all.

He is proceeded in death by his son Kellan; Father, Robert; Sister, Robin; Grandparents William and Ruth Porch, and William and Inez Harris.

A celebration of his life will be held on Thursday, January 14, at 11:00 a.m. in the Old American Legion Auditorium in Martin. Cal Clifford and Pastor Lisa Danielson will be officiating. A lunch will be served at the New Legion following the service.

Honorary pallbearers are all the extended “children” he claimed and loved. Also his family and great friends.

Memorial will be determined later. Condolences can be sent to the family at www.chamberlainchapel.com.