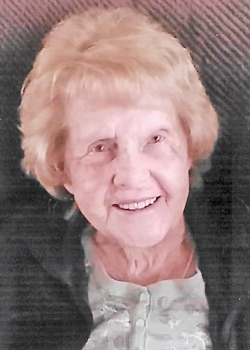 Jean Frances Liggett Weinmaster was born on April 11, 1924 to E.G. and Frances Liggett at Ft. Calhoun, Neb., one of three children. Jean moved to Martin at the age of five years old. She attended the Ferris Institute in Big Rapids, Mich. She returned to the area to teach school at He Dog and the Rosebud Boarding School.

Jean married Dave Weinmaster on June 5, 1943, and to that union four children were born, Roslyn, David, Nancy and Mark. They enjoyed 64 years of marriage until 2008, when Dave passed away.

Jean and Dave farmed near Martin for nearly 50 years, retired from farming in 2000 and moved to Martin. From 1970 to 1990 Jean was employed at the Lacreek Electric Association in Martin. Jean enjoyed gardening and her flowers. Her yard and flowers won Martin’s Most Beautiful Yard Award in August 2001. She also won an award on July 25, 2017, for being a 71-year member of the American Legion Auxiliary Post #240 in Martin.

She was preceded in death by her husband Dave, her brother Dale Liggett, her sister Ruth Sargent, her grandson Kiel Cook, great-grandson Xavier Weinmaster and great-granddaughter Coraline Weinmaster.

A memorial has been established and donations may be sent in honor of Jean to Security First Bank, PO Box 669, Martin, SD 57551. Bennett County Funeral Services were in charge of arrangements.