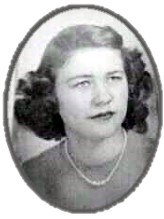 Georgia Daughters was born June 11, 1935, in Custer, SD to Homer and Margaret (Hovelshrud) Westover. Georgia passed away September 6th, 2022, at Bennett County Hospital in Martin, SD. She was 87 years old.

Georgia grew up in rural Martin, SD. Georgia was a very hard worker and made food service into a career. Started working as a waitress at Tallys in Rapid City, SD, Club Café in Martin, SD, Vesta’s in Martin, SD, Managed Markota Acres with her sister Jan, until finally deciding to open her own restaurant in Martin, SD. She started Geos Steak House and had her restaurant for around 20 years. After selling her restaurant Georgia volunteered and did the foster grandparent program with Martin Grade school. At nearly 80 years old she finally retired.

For more than 30 years Georgia remained with Frank Marshall. He was a stepfather to her children and grandpa to her grandchildren. When Franks health started declining, they shared a room together up until his passing. Georgia kept his wallet with his IDs with her at all times after his passing.

Georgia was preceded in death by her parents, her spouse Frank Marshall, her brothers Dean Westover, Terry Westover, and a favorite son-in-law to be Larry Bear Killer Sr.

Honorary Pallbearers are all friends and relatives.

Arrangements are one night wake service starting at 4pm Sunday September 11th with the funeral on Monday at 10am, to be held at the new American Legion in Martin SD.