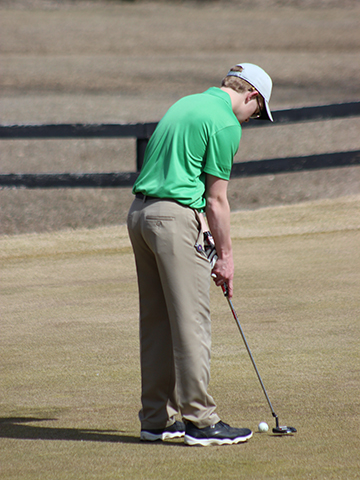 The Bennett County Golf Team kicked off their golf season by traveling to Rapid City to compete in the Elks Challenge Tournament. Due to prior harsh weather conditions, the team came into this meet with two weeks of indoor practice focusing on their short game. Considering most of the region was in the same boat, all teams attending were on a similar playing field.

Weston Ireland, Gage Jager, Titan Soderlin, Lily Alexander, Katie McDonnell, and Grace Jager represented BCHS at this tournament. Titan Soderlin started his season out strong by placing 5th overall in the Varsity Boys Division by shooting a score of 100. Weston Ireland finished his 18 holes with a score of 110 while Gage Jager finished with 136. Katie McDonnell shot a 136 followed by Lily Alexander with 145, and Grace Jager with 149.

All the athletes did a great job in their first meet of the season. We are looking forward to continue to improve and progress throughout the year.