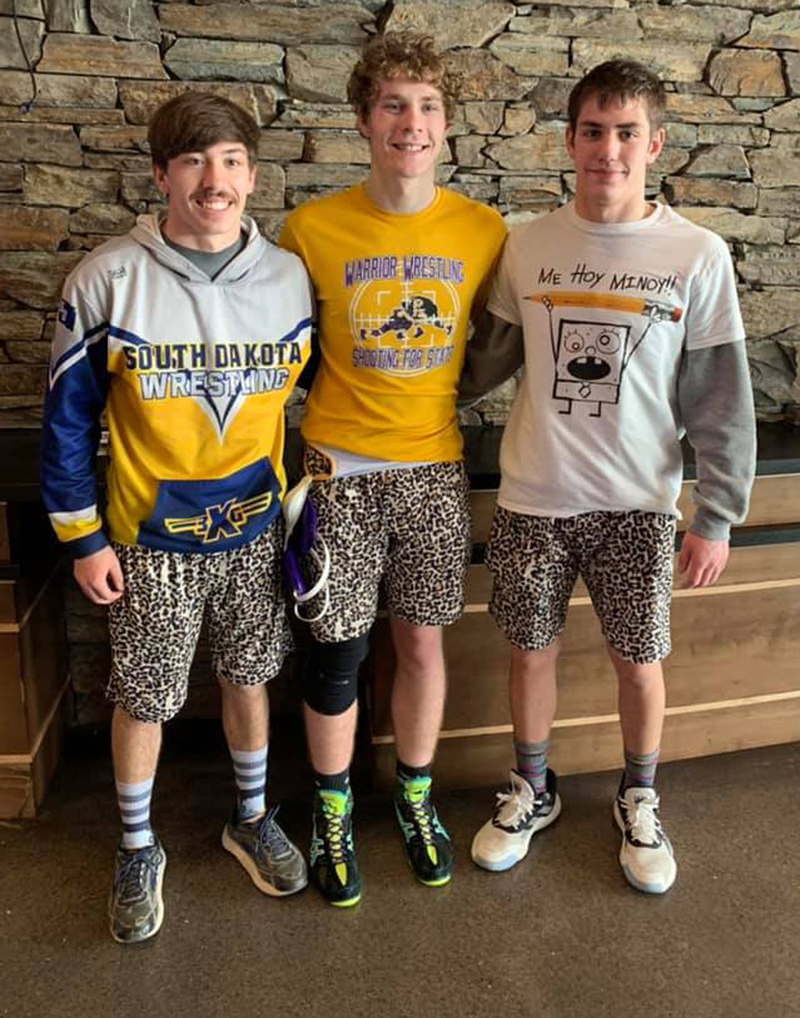 This past weekend six Warrior grapplers made their way to Sioux Falls for the State B Wrestling Tournament. For three of them, it was their first time competing on this large stage in front of an estimated 8,300 fans…for four of them it would be their last. However, neither the size of the venue nor the roar of the crowd seemed to faze any of these six great Warriors!

Jared Harris was our first participant, competing at the 132 lb. weight class. He started us off with a decisive win before meeting up with the eventual champion. That loss dropped him back to the consolation side of the bracket where he met up with a kid from Winner Area who had previously beaten Jared. This time around, however, Jared took it to him from the start and finished the match off with a pin! After another tough loss, he came back for the final match of his career, getting a pin and earning a 7th place finish.

Mason Heath was up next competing in the 145 lb. weight class. First up was a rematch with a kid who beat Mason at Regions the week before. Mason wrestled a smart tactical match and came away with the win. Like Jared, his second match was against the eventual champion. Dropping back, he had one of the more exciting finishes of the tournament. Down 1 point with time running out, Mason hit a throw to score the win and a place on the podium! In the 7th place match, Mason once again hit a throw that led to a pin against the kid who won our Region.

Up next was Ty Allen in the 152 lb. weight class. He drew the #1 seed in the first round and came up short in his second match as well against the 8th seed. While he didn’t get a win on his first trip to state, Ty will lead a talented group of sophomores that will be the heart of our team next year.

Weston Ireland, competing at the 160 lb. weight class, rounded out our three in a row weight class group (Mason, Ty and Weston) that kept the coaching staff busy. Weston started off with a pin over the Region runner-up from Custer. He then lost a heartbreaker in overtime to the eventual tournament runner-up. However, he came back strong with another close one-point match (this time a victory). He followed that up with a pin over a kid from Canton who had been wrestling well on the weekend and had a huge Canton crowd behind him. Weston ended his high school career strong with a 5th place finish!

Gabe Fanning was next at the 182 lb. weight class. His first round draw was the kid who ended up 5th. In his next match, Gabe dropped a very exciting one-point match that could have gone either way. Gabe quipped after his last match that the only kid who pinned him this year didn’t even make the state tournament. That by itself is a great indicator of just how much Gabe improved over the last couple of years. Making it to state as a senior was a great way to end his career.

Titan Soderlin sort of vanished from our program after a very successful AAU career. He came out this year as a senior but had some ground to make up. As you can tell by this article, we didn’t necessarily get the best draws and Titan fell into that group drawing the #2 seed first round. However, he came back strong with a pin of the #10 seed. Then, in one of the more entertaining matches, Titan nearly had another pin that would have placed him on the podium. However, he ended up on the short end of that match in the end. Titan had a great season, finishing with the 3rd most wins on the team!

For the three who placed, we talked about how only four kids throughout the entire state in each weight class get to end the season with their hand raised in their final match. All three of our place winners did just that! As a team we ended up scoring 34 points and placing 18th out of 49 teams. Our group of seniors scored all but 7 of those points. That means our young group coming back next year will have a difficult task ahead of them, but they are very capable of meeting that challenge!